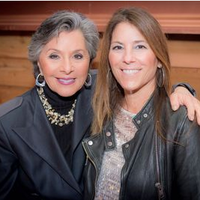 Until the day she left the United States Senate in January 2017, Barbara Boxer was a forceful advocate for families, children, consumers, the environment, and her state of California. Boxer served 24 years in the Senate, 10 years in the House of Representatives, and 6 years on the Marin County Board of Supervisors. Teaming Up with her daughter Nicole, Boxer now hosts a podcast called “Fight Back with Barbara Boxer.” It focuses on current political issues and interviews with people who are in the fight for America, and can be downloaded on iTunes or Podcast One.

Nicole Boxer is an Emmy Award–winning documentary filmmaker and political influencer. Boxer believes in the unique power of social impact media advocacy as a tool to create positive change in the world. That belief is the central focus of Boxer’s media portfolio, which spans multiple platforms, including TV, film, podcast, and print journalism. Ms. Boxer is an Executive Producer of the Oscar-nominated documentary films THE INVISIBLE WAR and THE HUNTING GROUND, investigations of rape and sexual assault in the military and on college campuses, respectively, which earned her a Peabody Award and two Emmys. Ms. Boxer serves on the Board of Directors for Headcount.org.

One Week Post-Midterms Here's What We Know

By Barbara Boxer and Nicole Boxer
Advertisement - Continue Reading Below
Yes, Voting Is Your Civic Duty, But It Also Feels Great

The Boxers share Election Day memories and encourage you to make some of your own.

By Barbara Boxer and Nicole Boxer
If You Want Change to Happen This Midterms, This Week Is When It Happens

It's time to get your Election Day plan in order.

The former senator and her daughter have one big takeaway.

What you do in November could change the future of our country.

By Barbara Boxer and Nicole Boxer
Yes, Running for Office Is Risky, But It's Worth It

There's never a good time to run, according to former senator Barbara Boxer and her daughter, Nicole.

By Barbara Boxer and Nicole Boxer