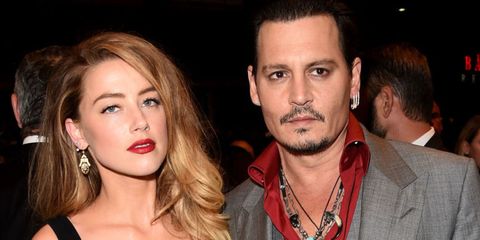 According to the divorce petition filed on Monday, Amber is seeking spousal support from her soon-to-be-ex-husband; but TMZ reports that Johnny has already filed a response via his lawyer, asking that the judge deny Amber's request.

The two first met on set of the 2011 film The Rum Diary, and began dating in 2012. Several years later, in February of 2015, they got married in a private civil ceremony at their home in Los Angeles.

A mere 15 months after that, Heard wants out. Perhaps it was the 22-year age difference between them, or, as is often the case in Hollywood, work schedules getting in the way. Regardless, we Jamber shippers will have to hang up our hats.

But not before re-watching this Rum Diary trailer a million times:

This content is created and maintained by a third party, and imported onto this page to help users provide their email addresses. You may be able to find more information about this and similar content at piano.io
Advertisement - Continue Reading Below
More From Celebrity
Meghan and Harry Blame the Palace for New Article
Serena Williams & Daughter Pose for First Campaign
Advertisement - Continue Reading Below
Britney Spears Shares Rare Photo of Sons on IG
Kim Kardashian Fell Asleep Mid-Glam
Things Are "Bad" Between William and Harry
A Look at Royal Family Portraits Through the Years
Inside the Royal Family's Secret Code-Word System