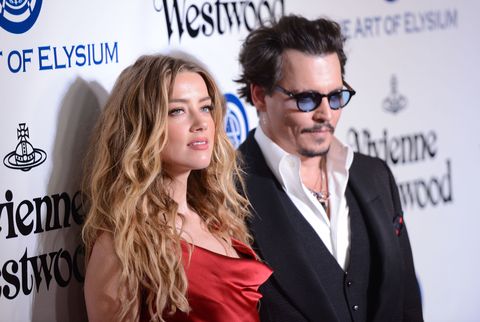 After reaching a settlement with ex-husband Johnny Depp outside of court earlier this week, Amber Heard has released a statement saying that she will donate the money to charity.

"As described in the restraining order and divorce settlement, money played no role for me personally and never has, except to the extent that I could donate it to charity and, in doing so, hopefully help those less able to defend themselves," Heard said in a statement to People.

"As reported in the media, the amount received in the divorce was $7 million and $7 million is being donated," she continued. "This is over and above any funds that I have given away in the past and will continue to give away in the future."

Heard first filed for divorce from Depp in May, citing irreconcilable differences. That same week, she was also granted a temporary restraining order after alleging that Depp had physically and emotionally abused her throughout their relationship. The restraining order was terminated on Tuesday.

"Our relationship was intensely passionate and at times volatile, but always bound by love," the pair said in a joint statement, according to The Associated Press. "Neither party has made false accusations for financial gain. There was never any intent of physical or emotional harm."

Heard specified that the money will be divided amongst multiple charities, including those that aim to combat violence against women, and the Children's Hospital of Los Angeles, where the actress is a longtime volunteer.

"I know these organizations will put the funds to good use and look forward to continuing to support them in the future," she continued. "Hopefully, this experience results in a positive change in the lives of people who need it the most."

This content is created and maintained by a third party, and imported onto this page to help users provide their email addresses. You may be able to find more information about this and similar content at piano.io
Advertisement - Continue Reading Below
More From Celebrity
See a Rare Portrait of Princess Diana's Mother
Kelly Ripa's Husband Left Her a NSFW Comment
Advertisement - Continue Reading Below
Jennifer Lopez on Learning to Love Herself
Diana's Wedding Interview Footage Is Telling
The Queen May Honor Kate Later This Year
Olivia Wilde & Harry Styles Keep It Profesh on Set
Prince Harry on How Tabloid Attacks Changed Him
Watch Orlando and Katy After Her Performance
Kate Middleton Debuted Long, Straight Hair
Prince Harry's Surprise Inauguration Appearance