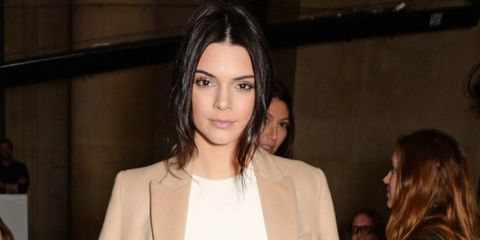 Three days ago, Kendall Jenner quit Instagram with no warning or explanation. The sudden disappearance of her profile made headlines — and Jenner herself just doesn't understand why. "It's so crazy to me that it even became huge news like that," she told Ellen DeGeneres. "Like, I have no idea how that — I guess I didn't expect it. But I also took my Twitter off my phone. Like, I didn't delete my Twitter entirely but I took the app off my phone. So I had no idea anyone was even talking about it. I honestly didn't think anyone would care. Yeah, and my friends kept texting me and my family members and I was like, 'How does everyone know?' And they started sending me links to like CNN and all these things and I was like, 'why is this even this big of a deal?'"

DeGeneres asked the model why she left. "I don't know, I just wanted to detox," Jenner said. "I felt like — I just wanted a little bit of a break. I'm always on it. I feel — I would wake up in the morning, and I would look at it first thing. I would go to bed, and it was the last thing that I would look at. It just, I felt a little too dependent on it. I kind of wanted to take a minute; it's a detox. I'll be back! I'll come back."

And while "withdrawals are starting to come in," Jenner highly recommends deleting your profile too for a bit. "I'm away from my phone so much more. You start to engage in like real life more, and you have to deal with real people right in front of you."

Jenner also discussed how her move into Emily Blunt and John Krasinski's old house has been and what it was like meeting Dream Kardashian, her new niece:

Alyssa Bailey News and Strategy Editor Alyssa Bailey is the news and strategy editor at ELLE.com, where she oversees coverage of celebrities and royals (particularly Meghan Markle and Kate Middleton).
Advertisement - Continue Reading Below
More From Celebrity
36 Celebrity Couples Who Love Some PDA
Ben Affleck Is Blond Now
Advertisement - Continue Reading Below
A Timeline of Charles and Diana's Relationship
Kendall Jenner Wants to Work for Beyoncé
Harry & Jon Bon Jovi Sing Together at Royal Event
Khloé Kardashian Is Being Trolled Over Febreze
A 'Friends' Reunion Special Is Coming to HBO Max
Katie Holmes Is in Head-to-Toe Chloé at Their Show
Ariel Winter Now Has Strawberry Blonde Hair
46 Stars Who Dated Before They Were Famous