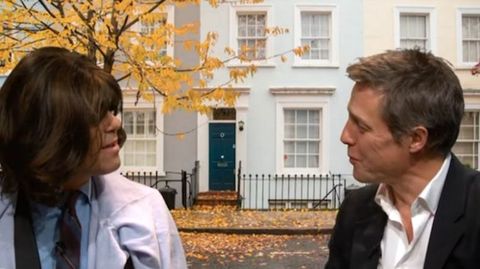 She's just a girl, standing in front of a boy, asking him to love her. Except, it's not Julia Roberts saying the famous line from the rom-com Notting Hill. It's Andy Cohen. In a wig. And it's equally parts amusing and terrifying.

Hugh Grant appeared on Cohen's Bravo show Watch What Happens Live, where the host admitted he has always wanted to play the lead romantic role in a movie opposite Hugh Grant. (Who doesn't?) And his wish came true! Grant, you're such a good sport.

Watch the hilarious moment below, and try not to laugh as Hugh Grant breaks character once or twice. (Seriously—can you blame him?)