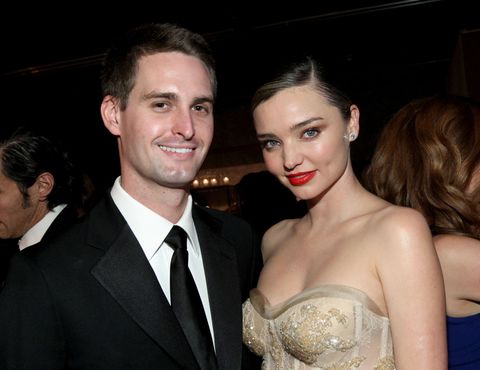 It's starting to seem like 2017 is the year of celebrity pregnancies. One famous lady who won't be announcing any new additions to her family any time soon though is Miranda Kerr. The Victoria's Secret model is engaged to Snapchat founder Evan Spiegel and the two appear to be taking a very traditional approach to building their family, according to Us Weekly.

During an interview with British newspaper The Times, the reporter and Kerr found themselves on the subject of birth control. When Kerr said she doesn't use birth control, the reporter asked if that meant she and Spiegel were planning to add to their family (Kerr already has a six-year-old son with ex-husband Orlando Bloom).

"Not yet. Not until after we get married," she replied. "My partner is very traditional. We can't…I mean we're just…waiting."

The response is a little vague, but seems to hint that the pair are waiting for marriage in the very traditional sense. There's no wrong way to plan for a family or express your love (before or after marriage) and as long as Kerr and Spiegel are happy, we're happy for them.