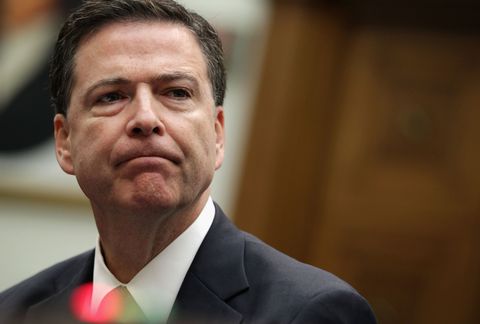 ICYMI (doubtful), Donald Trump casually fired FBI Director James Comey, which has the world in a state of 🚨 🚨 🚨 . And while the rest of us are low-key panicking, Comey is currently in a state of:

Not only was he spotted golfing in his yard shortly after news of his dismissal broke...

He recently stepped out of the house (for his first public appearance) and attended the musical Fun Home. In fact, HE CRIED DURING IT.

Friend of a friend's photo of James Comey at National Theater last night for Fun Home. He's the tall one. pic.twitter.com/mU00jvTPS8

Today James Comey and his wife Patrice joined us at #FunHome in Washington, D.C. pic.twitter.com/W5HLrgKaPi

"They were wiping away the tears as they came backstage to meet the cast," producer Barbara Whitman told the New York Times. "He said something to the effect of it was the best thing they could have picked for their first outing."

Disembodied Voice: Jim Comey, you've just been fired as head of the FBI! What're you gonna do now?
Comey, to camera: I'm going to FUN HOME!

Honestly, whatever it takes to get through, James Comey.