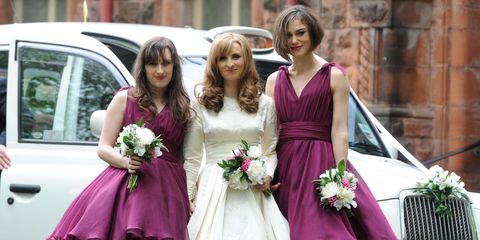 As any good bridesmaid knows, it's not about you—it's about the bride. And yes, this goes even for celebrities. While they're typically in the spotlight, these women stood by the side of their favorite brides to help celebrate their big days, matching dresses and all. Take a look at these star bridesmaids in one of their most special roles, ahead.

A bridesmaid was born (we had to) when Lady Gaga served as a bridesmaid to her longtime makeup artist, Sarah Nicole Tanno. She gave pretty in pink a whole new meaning.

For a friend's wedding where Lo Bosworth was also in attendance, Conrad stepped out in a tasteful taupe gown. It was one of Conrad's first outings since giving birth to her son in July.

@staud
3 of 40
Mary-Kate and Ashley Olsen

Mary-Kate and Ashley's friend avoided the mayhem often involved in assigning a particular dress style or color for her bridesmaids by simply telling her bridal party to wear florals. The Olsens, obviously, did not disappoint.

No acid green gunnysacks here. For her best friend's wedding in southern California, Bilson was blessed to wear a pale pink off-the-shoulder gown over which she layered a cape. Hmm, wonder what she'll choose should she ever decide not to be #alwaysabridesmaid, as she captioned her snap.

In video obtained by the Daily Mail, the Duchess of Cambridge, then 9, and her sister, then 7, can be seen acting as (somewhat fidgety) bridesmaids at their uncle Gary Goldsmith and Miranda Foote's 1991 wedding. Pippa apparently knew what was up with flower crowns...even then.

The actress wore a bell-sleeved mini-dress for her friend's wedding, captioning the photo she posted to Instagram with a simple: "Bridesmaids." If only all bridesmaids dresses could be so on-trend.

Dressed in a stunning blush Reem Acra gown, Taylor Swift made a beautiful maid of honor at her childhood bestie Britany Maack's Pennsylvania wedding on February 20, 2016. The pop star shared a sweet message Instagram that read: "I met her when I was 10 days old, and him in kindergarten. Now they're married and I'm the happiest maid of honor ever. Congratulations @britmaack and Ben!"

The businesswoman and DJ looked beautiful in this light blue Dennis Basso gown for her sister Nicky's wedding at Kensington Palace. #FitforRoyalty

The actress took a break from planning her own nuptials with Joe Manganiello to be a bridesmaid in her friend's wedding. We're fairly certain no one else could make pale yellow look this good.

The actress wore a pale blue halter dress at her sister Kayleen's wedding in Canada. The bridesmaid teared up quite a bit as her sis walked down the aisle. #AlltheFeels

The actress was seen walking down the streets of Spain barefoot (noooo) in this gorgeous, strapless tulle gown (yessss) for the wedding of her friends Alina Peralta and Manuel Gutierrez in Cordoba, Spain.

Rihanna wore this long lilac number for her assistant Jennifer Morales' wedding in Honolulu on April 20, 2015.

The actress/model wore a Chanel Couture dress while acting as the maid of honor for her sister's wedding in 2014. (She was reportedly one of 17 bridesmaids. DANG.)

The actress wore this lilac strapless gown for her assistant's wedding in 2006.

The actress wore this blue dress as her husband, Cash Warren, served as best man while she served as a bridesmaid for their friend's nuptials in 2010.

Reunion time! The actress wore this strapless gown at the 2008 wedding of her 7th Heaven co-star Beverley Mitchell.

The singer was stunning in pale pink at the 2004 wedding of sound engineer Sean Sullivan. Fun fact: Justin Timberlake also attended the wedding.

Kate Bosworth helped her friend say, "I do," in Sydney in 2008. (Champagne really helps.)

The British actress was a bridesmaid to her (now) sister-in-law Kerry Nixon, who married Knightley's brother Caleb in Glasgow in 2011.

The E! reality star looked beautiful in this purple gown at the wedding of her sister Khloé Kardashian in 2009.

Selena kept it blue and tropical for a Mexican beach wedding in 2011. (J. Biebs was her date, which is kind of nuts when you think of how long ago that was.)

Dobrev wore a blush-pink bridesmaid dress to BFF Julianne Hough's wedding in July of 2017. The dress is gorgeous, but what she said about Hough on her big day is #goals.

Jagger sisters were there for their mom, Jerry Hall, as bridesmaids at her London wedding ceremony to Rupert Murdoch in 2016.

Celebrating the marriage of sister Solange to Alan Ferguson in New Orleans, Beyoncé was a vision in white (!) because when you're Beyoncé rules can bend for you.

J-Law (far right rocking the pixie cut) served as a bridesmaid for her now-sister-in-law's special day with Jennifer's brother, Blaine. The wedding was so specular it naturally deserved to be on the cover of Martha Stewart Real Weddings.

Insecure actress Issa Rae glowed in blush-colored gown as a bridesmaid for her longtime friend's wedding.

American Horror Story star Emma Roberts supported fashion designer friend Kara Smith as one of 10 bridesmaids at her wedding in 2015.

Dunham and her fellow bridesmaids wore possibly the best skirt ever from J.Crew at the wedding for Dunham's childhood friend, Audrey Gelman.