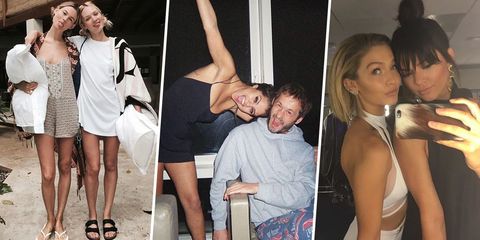 We have been so blind—there's an epidemic of World War Z proportions brewing right under our noses, and we haven't even noticed. What is this scourge called, and what does it look like? 1) Head Magnets, which have already overtaken Hollywood. (Pray for their souls.) And 2) Sufferers. They come in pairs, and appear to have negative and positive magnets in their craniums that attract each other, hence the leaning. Review these examples (and your will), and get all your affairs in order. No one is safe.

Would not be mad about contracting Head Magnets if I got it from Jon Hamm, TBH.

I'll show you mine.

After we finish a show and don't mess it up

An even rarer example of the sideways strain.

All is good when I've got my beautiful KK by my side! 🌹🌹🌹 Showin off our makeup by @patmcgrathreal and hair by @guidopalau backstage at @DOLCEGABBANA today ❤️ @tabithasimmons

If you feel your head gravitating toward your friend's before a selfie, seek medical treatment immediately.

JK. There is no cure.

The upside is that it's cute.

Set days with this babe 😘 @gigihadid

The downside: "There is no hope for salvation. Good luck." —the CDC

Very flattering, though, especially if you take the Gigi position in this Head Magnet sandwich.

Even better if you catch it backstage at Dolce & Gabbana.

My mentor. My angel. I love you! Congratulations on your book. You deserve it all. Greatest in the world. @iamnaomicampbell ❤️

Okay, forget what I said about Jon Hamm. Naomi all the way.

PSA: You can get it from your mom.

Absolutely no head-to-head contact is the only 100 percent effective method against Head Magnets, so don't be like Kimye.