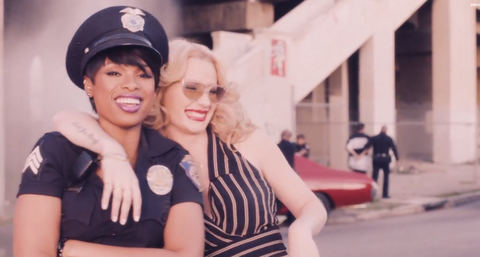 Running away is so hot right now: Just ask Charli and Rita, Reese and Sofia, and the pair of llamas that almost made it freedom before animal control corralled them on a street in Arizona.

Iggy Azalea and Jennifer Hudson make four with the '70s-style music video for "Trouble," in which Gun Moll Iggy's ne'er-do-well boyfriend botches a bank robbery, setting off a chain of events that includes a jail break, a high-speed car chase, and a hug that turns into an arrest. Oh, and just in case you couldn't tell from the busting-a-criminal-out-of-prison thing, the song's about liking a guy who's bad news because he has bad posture and poor table manners. I think.

For a good time, watch the video below.

The Charli XCX and Rita Ora Music Video Has Dropped!

Great Thing of the Day: This Epic Llama Chase

Chelsea Peng I'm Chelsea Peng, the assistant editor at MarieClaire.com.
Advertisement - Continue Reading Below
More From Culture
'Good Girls' Is Back for an Explosive Season 3
Netflix's 'Haunting of Hill House' Will Return
Advertisement - Continue Reading Below
Criminal Minds Season 15 Will Be Its Last
The Hot New Podcasts to Add to Your Queue
Who Are the Women of 'The Bachelor' in 2020?
Join Marie Claire's Virtual Monthly Book Club