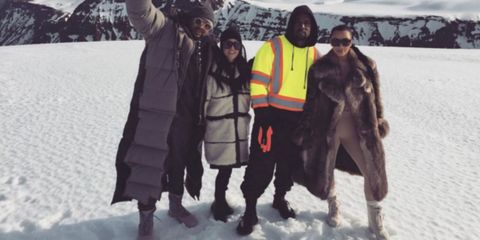 In the great fancy-dress party that is life, Kanye is that one guy who shows up in his regular clothes. In celebration of his singular style and his commitment to *subverting* the dress code instead of dutifully adhering to it, here are 16 times he looked at the group text and went "Nah."

When he paid tribute to Tupac but not the note at the bottom of the invitation that said "black tie."

Fact: 80 percent of Kanye's unhappiness can be attributed to being underdressed.

When you fall asleep and the squad decides on monochrome.

TBH, would not want to be standing next to Keren Craig in *any* outfit, so might as well do the backward cap thing.

Unless he's got guyliner under there?

Suit, suit, SKELETON HOODIE THAT ZIPS UP INTO A SKULL.

Okay, but what if WE'RE the ones not getting the memo? Did you ever think about that?

You laugh now, but when it's Day 18 of being trapped on top of a glacier and you're thinking that human flesh might just taste like tartare, you'll be thankful Kanye wore that stupid thing to attract the helicopter pilot's attention.

Ugh, Kanye. This one was so obvious.

A cable-knit sweater. Not that 2005 John Legend is doing much better, but still.

Kanye vs. The Dads.

On the right, two chill famous dudes visiting USC. On the left, anachronistic Gucci model. (But I want that cardigan.)

Honestly, if only we could all have Kanye's self-confidence. 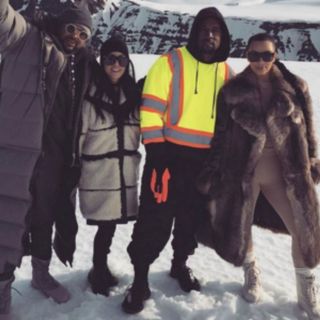 Advertisement - Continue Reading Below
This content is created and maintained by a third party, and imported onto this page to help users provide their email addresses. You may be able to find more information about this and similar content at piano.io
More From Fashion
Rain Jackets That'll Make You Excited for Storms
The Best Swimsuits, According to 100s of Reviews
Advertisement - Continue Reading Below
Chunky Sneakers We Can't Resist
Floral Dresses You'll Wear on Repeat
Let Amazon Help You Figure Out Your Work Wardrobe
In Partnership with Amazon Fashion In Partnership with Amazon Fashion In Partnership with
Amazon Fashion
The Evolution of Royal Engagement Rings
Summer Hats to Fall in Love With
Celebs Wore THAT to the Airport?!
How Princess Eugenie's Wedding Dress Compares
Meghan Markle's Life in Photos