It's a total eclipse by President Donald Trump of Barack Obama.

The series starts with a photo that shows a glimpse of Trump, who is in color in the frame, along with a black-and-white image of Obama. Trump gradually commands more of the frame in the next two photos until the fourth and final one shows a smiling Trump and no Obama.

Trump retweeted the series, titled "The Best Eclipse Ever!" from Twitter user, @JerryTravone.

It's not the first time the president has made what some might call a poor choice of retweet. Three days after peaceful counter-protester Heather Heyer was hit by a car and killed by a white nationalist in Charlottesville, VA, Trump re-tweeted and then deleted a cartoon of a "trump train" running over a CNN journalist. 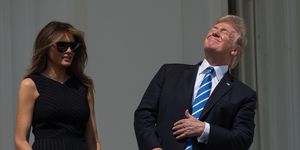 Here Is Trump Looking Directly at the Eclipse Sun