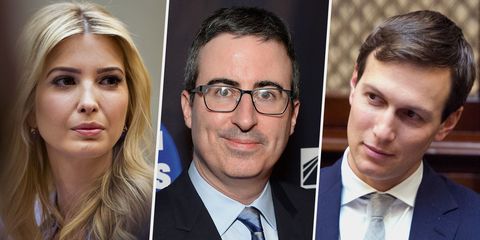 John Oliver's latest rant is a must-watch for people concerned about the influence Ivanka Trump and Jared Kushner have on Donald Trump's presidency. While Ivanka has been cast as a moderate voice of reason in her dad's inner circle, Oliver breaks down whether or not we should *really* assume that she secretly has the backs of people who, you know, don't want to defund Planned Parenthood or ruin the environment.

"The assumption many of us have that she disagrees with him isn't actually based on much," Oliver says. "It's the same way I assume Johnny Depp's penis also has its own miniature hat and gold teeth."

Oliver also examines what is is about Kushner's background that qualifies him to handle government reform, the middle east, and the opioid epidemic (among other tasks), and it's...well, scary. Watch below to LOL/cry.