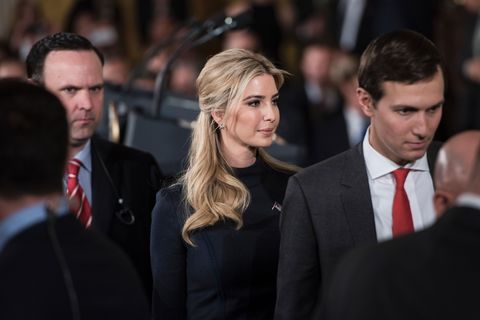 Further confirming her unprecedented political influence as President Donald Trump's daughter, Ivanka Trump reportedly now has an office in the West Wing of the White House and will be authorized to receive classified government information.

Despite still not having an official role in her father's cabinet, Politico reports Trump will have her own office on the second floor of the West Wing, next to senior adviser Dina Powell. In a statement on Monday, Trump's attorney and ethics adviser Jamie Gorelick confirmed the president's oldest daughter will also receive government-issued communications devices and have security clearance to access classified information. She will not have an official title or serve as a government employee, but intends to follow the same ethics rules that would apply if she did.

"Our view is that the conservative approach is for Ivanka to voluntarily comply with the rules that would apply if she were a government employee, even though she is not," Gorelick said. "The White House Counsel's Office agrees with that approach."

As previously reported, Trump's unofficial role in her father's cabinet has raised major red flags from an ethical standpoint, with many pointing out the potential conflicts of interest and questioning whether her involvement violates anti-nepotism laws. In particular, many have taken issue with the fact that she's continuously sat in on meetings with foreign leaders, and might be using her influence as first daughter to promote and benefit her clothing and accessories brand.

In response to these concerns, Trump previously agreed to step down from the company and hand over the reigns to former Chief Brand Officer Abigail Klem—but a new report from The New York Times suggests she isn't quite as removed from the company as it seems.

Because she did not opt to put her assets in a blind trust, Trump still has a fair amount of power over the company, and can "address potential conflicts in one of two ways: [by recusing] herself from related White House business or [vetoing] a potential business deal for her company." However, she will no longer be the "face" of the brand, and has separated her business and personal accounts as a result.

"Ivanka created the trust to separate herself from the business and implement controls and processes that facilitate compliance with ethical requirements," Gorelick told the Times.

"While there is no modern precedent for an adult child of the president, I will voluntarily follow all of the ethics rules placed on government employees," Trump added in a statement.

The company's assets were transferred to a new trust overseen by relatives of Trump's husband, White House adviser Jared Kushner, in early March. She is the sole beneficiary of the Ivanka M. Trump Business Trust.

In response to the news that Trump would be receiving a West Wing office and security clearance, many took to social media to voice their outrage and disapproval, including National Security Council spokesperson Bernadette Meehan.

Appalling. Can you imagine the outcry if Obama or Clinton had their daughter in the Whitehouse advising them?

Additional reporting from The Associated Press.

Advertisement - Continue Reading Below
More From Politics
Ayanna Pressley Wants Total Justice for Survivors
Jot Down These 2020 Voter Registration Deadlines
Advertisement - Continue Reading Below
What the ACLU Will Fight For in the Next 100 Years
Behind the Controversy at the Women's March
Women Are Not Granted Equality in the Constitution
Electability Is About Us—Not the Candidate
Everybody Running for President In 2020
Time’s Up for Wall Street
Women of Color Ruled Last Night's Debate
Cory Booker, Rosario Dawson Are Traveling Together