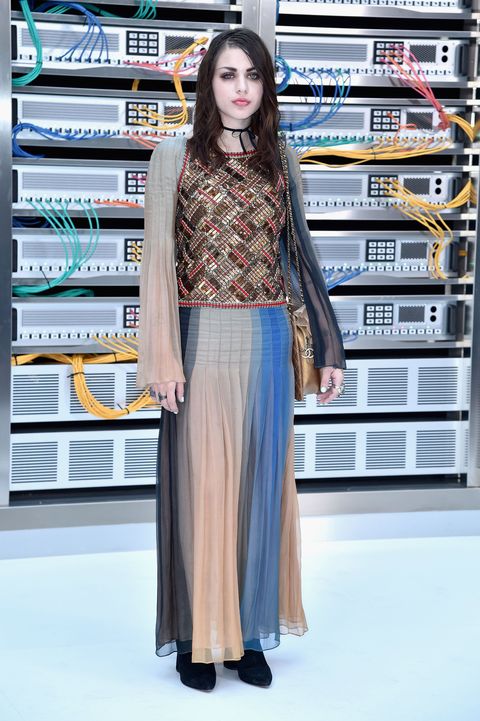 Succeeding icons like Cher and Winona Ryder, Frances Bean Cobain, progeny of Kurt and Courtney Love, has been cast as Marc Jacobs' latest campaign star in a representation of "what a general, standard, average human girl would look like wearing these clothes," as she said in an interview about the new images.

"I don't model unless I think the project is cool, and I don't put my name behind something that I don't genuinely believe in," the 24-year-old said. "I thought this collection was great, and I was flattered that Marc thought of me for this. What I said to Marc when I was saying yes was that he's an underdog for the masses. He's still very rebellious within the fashion world, and he's been like that his entire career."

And the feeling appears to be mutual, judging by the designer's caption, in which he praises the young artist for her "beauty, uniqueness, and strength"—and tells an epic anecdote.

Chelsea Peng I'm Chelsea Peng, the assistant editor at MarieClaire.com.
This content is created and maintained by a third party, and imported onto this page to help users provide their email addresses. You may be able to find more information about this and similar content at piano.io
Advertisement - Continue Reading Below
More From Celebrity
Princess Eugenie's Son Got to Meet Prince Philip
Ashley Graham Is Having Twin Boys
Advertisement - Continue Reading Below
Gabrielle Union Danced Topless at a Window
Ben Affleck Is "in Awe" of Jennifer Lopez
Princess Beatrice Has Given Birth to a Baby Girl
Gigi Hadid's Mom Shared Sweet Pics of Khai
Kate & Will Probably Won't Have a Fourth Child
Ben & Jen Plan to Spend the Holidays Together
Kate & Will Are "Anxious" About Harry & Meghan
Mandy Moore Calls Breast Pump Emmy's MVP Accessory