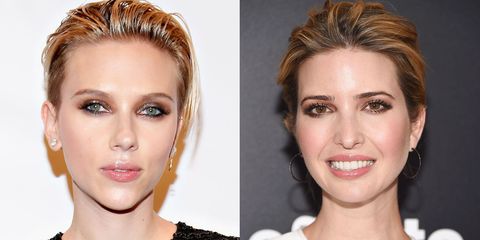 Ivanka Trump recently gave an interview about her role in Donald Trump's administration, during which she argued that everyone should stop accusing her of being complicit since no one *really* knows what's she's doing. Hm.

Unsurprisingly, people—including Scarlett Johansson—are not satisfied by that response. While speaking to Arianna Huffington at New York City's Women in the World Summit, the actress said she is "so disappointed" by Trump's interview—specifically her claim that she could make a positive impact behind closed doors.

"If you take a job as a public advocate, then you must advocate publicly," Johansson said. "How old fashioned, this idea that behind a great man is a great woman. What about being in front of that person or next to that person?! ...She has an opportunity to really make a big impact just by being vocal..."

According to EW, the actress also added "It's such an old-fashioned concept that to be a powerful woman you can't appear to be concerned [with appearances]. Screw that, it's so old-fashioned, it's so uninspired and actually really cowardly."

Mehera Bonner Contributor Mehera Bonner is a news writer who focuses on celebrities and royals.
This content is created and maintained by a third party, and imported onto this page to help users provide their email addresses. You may be able to find more information about this and similar content at piano.io
Advertisement - Continue Reading Below
More From Celebrity
Did the Queen's Brooch Send a Message?
Jennifer Lopez and Ben Affleck: Everything We Know
Advertisement - Continue Reading Below
What Happens on Katie's Season?
A Look Back at Gwen Stefani & Blake Shelton's Love
Beyoncé Celebrates Twins Rumi and Sir Turning 4
Katie Nails Casual Cool in Jeans, Tee, and Loafers
Gigi Hadid Wore the Coolest Bright Orange Eye Look
Courteney Cox's Daughter Coco Is Her Double
Sophie Shared a Stealth Selfie on Instagram Story
Meghan and Diana Had Similar Issues with the Queen