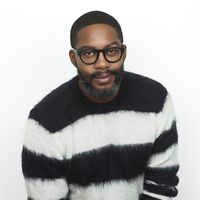 Mitchell S Jackson is the critically acclaimed author of novel The Residue Years and the essay collection Survival Math. Jackson is the winner of a Whiting Award. His novel also won The Ernest J. Gaines Prize for Literary Excellence. His nonfiction book Survival Math: Notes on an All-American Family was published in the spring of 2019 and named a best book of the year by fifteen publications, including NPR, Time Magazine, and Esquire Magazine. His honors include fellowships from the New York Public Library’s Cullman Center, the Lannan Foundation, the Ford Foundation, PEN America, TED, the New York Foundation for the Arts, and the Center for Fiction. Jackson teaches creative writing at the University of Chicago. Find him at www.mitchellsjackson.com or @mitchsjackson

With their superhero epic delayed, the actresses talk the real-life plot twists 2020 is throwing at them.