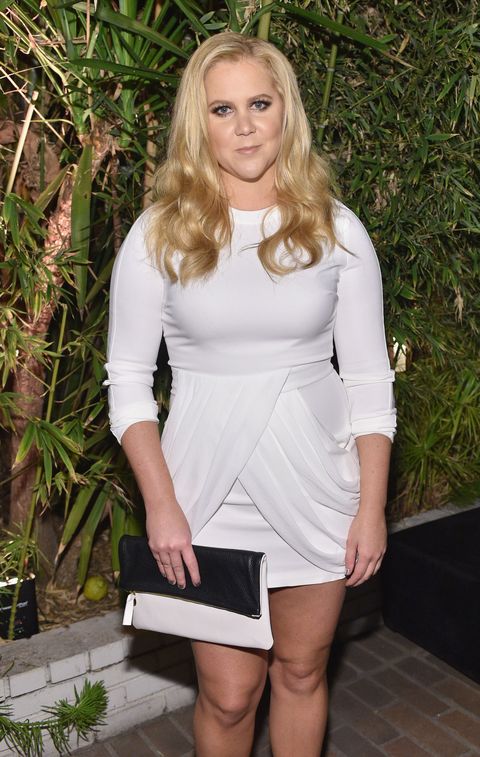 Fans of Amy Schumer got a delightful treat this week after the beloved comedian dropped a brand new stand-up special on Netflix.

Covering everything from vagina smells to getting food poisoning very early in a relationship, Amy Schumer: The Leather Special is unapologetic, raunchy, smart, and intimate. Most notably, the 35-year-old leaves no stone unturned when it came to discussing her body, often poking fun at Hollywood's absurd standards of beauty.

"I tweeted out a photo of myself wearing just underwear—nothing but underwear," she said, referring to a picture of herself taken by Annie Liebovitz that she'd shared on social media in 2015. "I'm holding a coffee, I'm topless in just underwear, and it goes viral. Like it was everywhere. Every news show. Every website. And that's when I learned the word you don't want people to use when a nude photo of you goes viral: brave."

Later in the special, Amy also discussed being told to lose weight for her movie Trainwreck, and what she learned after gaining it back.

"I am what Hollywood calls 'very fat,'" she said. "You know me. I feel very good in my own skin. I feel strong. I feel healthy. I do. I feel sexy."

"[But] when I was doing my first movie Trainwreck, before I did anything, somebody explained to me, 'Just so you know, Amy, no pressure, but if you weigh over 140 pounds, it will hurt people's eyes,'" she continued. "I just bought it. I was like, 'Okay, I'm new to town.' So I lost weight."

After losing the weight, however, she came to the realization that she was happier with her body before.

"Thank God I look very stupid skinny," she said. "My dumb head stays the same size, but then my body, like, shrivels and I just look like, a Thanksgiving Day parade float of Tonya Harding...Nobody likes it. It's not cute on me."

"I got worried because it gets in your head—just everything on television and movies and magazines and the internet," she continued. "I'm like, 'Oh, my god! Are men still going to be attracted to me?' And that's when I remembered...they don't care."

You can watch Amy Schumer: The Leather Special on Netflix now.