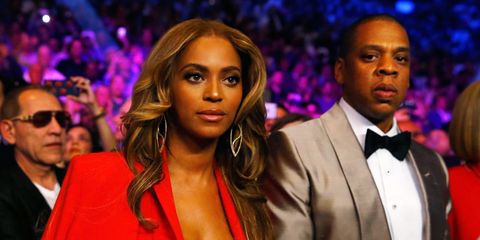 Update, 6/1: Stand down, Beyhive: The Queen's music is safe for now.

Sony Music's CEO Doug Morris has issued a statement denying Bloomberg's report, in which he calls Jay-Z a friend and business associate while trying to produce calming feelings with his words. "I have always admired his business acumen, his entrepreneurship and his passion for music. All of our content, including Beyoncé, is available through the Tidal service, and we have announced no plans to remove our catalog from Tidal. Like all of our other partners, we are rooting for Jay and Tidal to succeed."

Original post, 5/29: Even though she is a co-owner ofTidal, married to its cost-of-water-denying founder, and freakin' BEYONCE, freakin' Beyoncé just got a nasty little reminder that she does not, in fact, run the world. *sprints for cover*

In a feature on Tidal's struggle to make the music industry a safer, better, more lucrative place for Jay Z and Jay Z's friends, Bloomberg Businessweek reports that Sony is threatening to pull its artists' catalogues from the platform, including that of Our Queen Beyoncé, if Hova doesn't pay $$ for streaming rights. Not to worry (too much), though: Tidal has already reached agreements with Warner and Universal, two other major record companies, and please—we're talking about a couple whose estimated net worth is more than $1 billion.

If only the rest of us could get #BeyoncéBailouts, eh?

Chelsea Peng I'm Chelsea Peng, the assistant editor at MarieClaire.com.
This content is created and maintained by a third party, and imported onto this page to help users provide their email addresses. You may be able to find more information about this and similar content at piano.io
Advertisement - Continue Reading Below
More From Celebrity
Ben Affleck Had Dinner With J.Lo and Her Kids
Jessica Biel Talked "Secret COVID Baby" Phineas
Advertisement - Continue Reading Below
Katie Holmes Paired Baggy Jeans With a White Tank
Why Rachel McAdams Turned Down 'Devil Wears Prada'
Did the Queen's Brooch Send a Message?
Jennifer Lopez and Ben Affleck: Everything We Know
What Happens on Katie's Season?
A Look Back at Gwen Stefani & Blake Shelton's Love
Beyoncé Celebrates Twins Rumi and Sir Turning 4
Katie Nails Casual Cool in Jeans, Tee, and Loafers