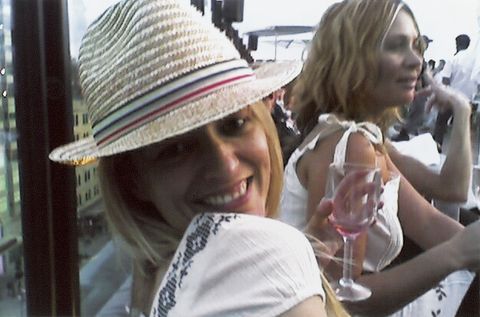 Notable Quote: "Music crosses all borders. It is the ultimate inspiration."

The daughter of a single welfare mother, Jennifer Justice grew up in Washington state during the grunge craze. Today, she is the youngest partner at the entertainment law firm Carroll, Guido & Groffman, representing clients like Jay-Z and Method Man. How did she get from there to here? Marie Claire talked with Justice about beating the odds.

Q: So what exactly do you do?

A: My job is to know everything about the musicians we represent and what they want in life. I go to all the shows, become friends with them. In this business, you have to be able to do the smart-lawyer thing, but also be the person who can hang with Velvet Revolver and have that je ne sais quoi. You can't be intimidated and you can't be starstruck — or, the other way around, you can't think that these singers are a bunch of idiots. You have to be able to move between worlds effortlessly, and my background has helped me do that.

A: I grew up as one of three kids to a teenage mom. My mother was so young when she had me that now I have friends her age. I knew that I never wanted to be like that — dependent on men and welfare to get by. So I did well in school, went to college, then got a scholarship to Cornell Law School.

Q: It's a big leap from welfare to where you are now.

A: Actually, a lot of my clients come from the same background as I do. There's a lot of insecurity in growing up poor. My clients want guidance. And they know that I'm here to look after their business assets.

Q: What's the coolest thing about being a music lawyer?

A: I don't need two separate outfits for my job and my life — we're not the corporate suit types! But seriously, I love that, as a music lawyer, I stand for someone's ideas; I'm representing an art form. As a corporate lawyer, you often don't stand for anything.

Q: What made you choose this career?

A: Grunge music was big when I was at the University of Washington and working in the prosecutor's office in Seattle. I would go listen to the bands, and I loved it! There were always female lawyers at the shows who were representing the bands, and I thought that would be such a great job.

Q: When you're not at shows, what are you doing?

A: I'm at listening parties or in studios hearing samples. In Hollywood, it's the agent who gets the actor the gig. In music, lawyers play that role. I have a bunch of "baby bands," as we call them — groups starting out that I shop around, trying to get them a record deal.

Q: What's it like being in business with Jay-Z?

A: I remember when we were working on The Black Album. It was a high-stress environment — there was a time crunch, and I was dealing with some difficult personalities. It was Friday night, and I was exhausted, unwinding at dinner with a friend. Suddenly, I get a text message from Jay-Z. I'm like, Now what? He says, "I'm getting calls from people saying you're a real hard-ass to work with." And I was like, Uh-oh, I'm in trouble. Then he goes, "Ha! Ha! That's why I like you!" Because at the end of the day, I'm the hard-ass he pays to look out for him.