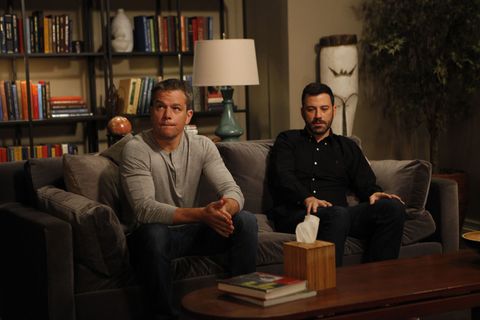 Ever since Jimmy Kimmel's then-girlfriend Sarah Silverman broke the news that she was "F*cking Matt Damon" with a delightful music video, the two men have become sworn enemies who wound up in couples therapy Monday night.

After a long setup in which we learn that Matt "We Bought a Zoo" Damon has lived in the Wi-Fi-less studio basement for 10 years waiting for Jimmy to stop cutting to commercial and finally welcome him onto his show, they're finally able to set aside their differences (ish) and hug (ish) it out.

The Great Damon-Kimmel Beef of the 2000s has produced some brilliant late-night TV, so TBH, we no longer require your services, Dr. Kim Canterburger, Ph.D. Watch the latest development in the feud here.