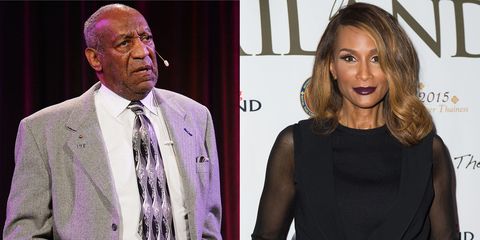 Just last week, Bill Cosby filed a lawsuit against seven of the women who claimed he drugged and sexually assaulted them, claiming they made up their stories for their own gain. Now, he has filed another suit against one of the most famous women who accused him of drugging her: supermodel Beverly Johnson.

Last November, Johnson went public with her story in Vanity Fair, claiming that he drugged her cappuccino and attempted to "take advantage" of her during a meeting about a part on The Cosby Show. Since then, dozens of women have accused Cosby of similar assaults, and Johnson has told her story to New York magazine and on an A&E special.

Bill Cosby's lawyer, Monica Pressley, said in a statement that her accusations were "false, malicious, opportunistic, and defamatory" and made up in an attempt "to resuscitate her own career" and get attention around her memoir. Cosby insists that he never drugged Johnson, and her claims are completely false.

Cosby is suing Johnson for defamation and the intentional infliction of emotional distress, and is seeking monetary damages. He's also seeking an order that would permanently block Johnson from making her statements against him, and that would make Johnson publicly retract her statements and remove a chapter from her memoir that discusses the alleged assault. Johnson has yet to publicly comment on the lawsuit.