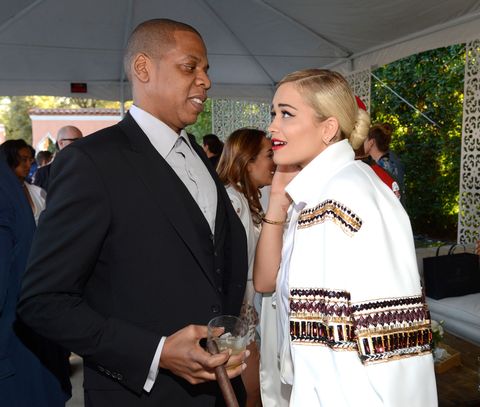 The legalese tells the story of Jay Z investing millions of dollars to raise a talented "unknown singer" out of the depths of anonymity, but between the lines, Roc Nation's $2.4 million lawsuit against Rita Ora says "We tried to make you happen but you didn't and now we want our money back."

According to Page Six, the music label is bringing a countersuit against the British X Factor judge for breaking her recording contract and failing to deliver the five albums she promised when she signed in 2008. (She's only put out one.) In Roc Nation's own words, the company "has tirelessly promoted [her] career, investing millions of dollars in marketing, recording and other costs, which was instrumental in guiding Ms. Ora to her current level of success and fame."

Six weeks ago, Ora sued the label in California, claiming record execs neglected her once they started representing professional athletes.

And that's pretty much all there is to it.

Chelsea Peng I'm Chelsea Peng, the assistant editor at MarieClaire.com.
This content is created and maintained by a third party, and imported onto this page to help users provide their email addresses. You may be able to find more information about this and similar content at piano.io
Advertisement - Continue Reading Below
More From Celebrity
Harry Back With Will & Kate at Philip's Funeral
How Prince Harry and Meghan Honored Philip Today
Advertisement - Continue Reading Below
40 Celeb Exes Who Worked Together After a Breakup
Iconic Party Photos From the Past
The Best TV and Movie Wedding Dresses of All Time
47 'Friends' Facts Every Superfan Should Know
A Look at Royal Family Portraits Through the Years
40 Rare Photos of Grace Kelly Through the Years