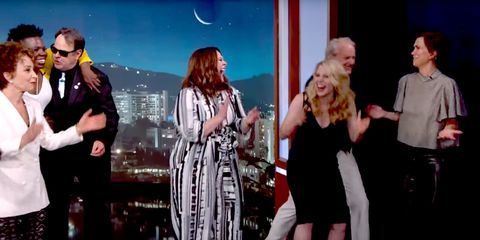 When news broke that the Ghostbusters reboot was getting an all-female cast, half the internet was like "yas, kween!" and the other half was like "boo, girls are lame." In other words, it was the best of times, it was the worst of times—but we're happy to report that the OG Ghostbusters and the new kids on the block have united with a casual dance party.

And then look at Bill Murray again.

Ok, now watch the full video and bask in the epic-ness.

Mehera Bonner Contributor Mehera Bonner is a news writer who focuses on celebrities and royals—follow her on Instagram.
Advertisement - Continue Reading Below
More From Celebrity
Khloé Kardashian Is Being Trolled Over Febreze
Katie Holmes Is in Head-to-Toe Chloé at Their Show
Advertisement - Continue Reading Below
A 'Friends' Reunion Special Is Coming to HBO Max
Ariel Winter Now Has Strawberry Blonde Hair
46 Stars Who Dated Before They Were Famous
Every Easter Egg in Taylor Swift's 'The Man' Video
Kate Middleton Does Some Sports in $38 Sneakers
Sarah Hyland Defends Ariel Winter’s Dress on Insta
Prince Harry Wants to Go by Just "Harry" Now
Ashley Graham Talked Breast Pumping in an Uber