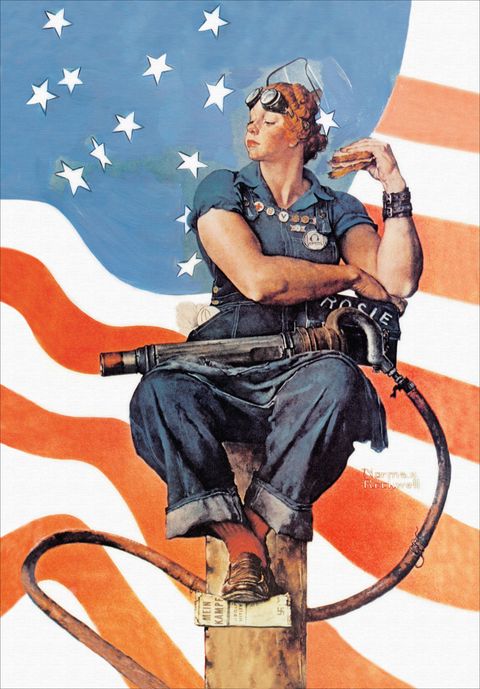 Mary Doyle Keefe, the model for Norman Rockwell's iconic Rosie the Riveter painting, died in Connecticut on Tuesday. She was 92.

According to the Associated Press, Keefe posed for Rockwell when she was a 19-year-old telephone operator living in Vermont. Twenty-four years later, after the image appeared on the cover of the Saturday Evening Post, the artist wrote Keefe, calling her the most beautiful woman he'd ever seen and apologizing for exaggerating her shoulders and arms.

The painting—not to be confused with the more stylized, "We can do it" version—became a symbol of wartime resilience and the millions of American women who worked on the home front during World War II.

Keefe, who worked as a dental hygienist, is survived by her four children.

Exclusive: Jane Fonda on Fame, 'Empire,' and the State of Feminism Today

This content is created and maintained by a third party, and imported onto this page to help users provide their email addresses. You may be able to find more information about this and similar content at piano.io
Advertisement - Continue Reading Below
More From Culture
The Best '80s Movies Ever Made
'Shadow and Bone' Cast: Get to Know Who's Who
Advertisement - Continue Reading Below
The Unbearable Whiteness of Ballet
'Ginny & Georgia' Season 2: Everything We Know
The Ultimate Ranking of 'GOT' Sex Scenes
The Cast of 'The Nevers' Plays Trivia
The Most Exciting New TV Shows of 2021
Get to Know Delessa From 'The Circle'
36 Movies With Super-Romantic Sex Scenes
Anne Hathaway & Elizabeth Nyamayaro on Compassion