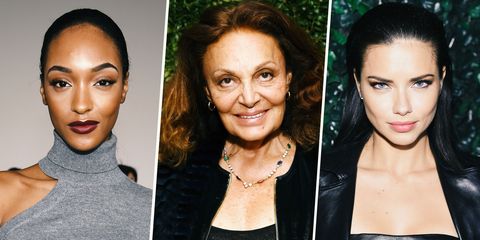 New York Fashion Week might have just ended, but the prevalent themes of politics and protest continue with a new video featuring 81 of the industry's brightest stars.

Produced by W Magazine, the video features celebrities like Diane von Furstenberg, Caroline de Maigret, Joseph Altuzarra, and Grace Coddington all cut together, declaring "I am an immigrant" in direct opposition to Trump's recent executive order banning refugees and travel from seven Muslim-majority nations. It concludes with a lingering shot on von Furstenberg, who says "I am immigrant. And America was very good to me."

Watch the powerful clip below, and keep in mind that this was filmed *during* the busiest time of year for the participants. Some might say fashion exists in its own bubble, but that is, and simply cannot be, true.

Chelsea Peng I'm Chelsea Peng, the assistant editor at MarieClaire.com.
Advertisement - Continue Reading Below
More From Fashion
We Found the Best Modest Swimsuits for Summer
Fashion Comes Together to Fight Coronavirus
Advertisement - Continue Reading Below
Your Official Guide to the Royal Family's Tiaras
20 Women-Owned Small Fashion Brands We Love
Everlane Is Having a Sale on Its Coziest Clothing
All the Different Ways to Wear a Floral Skirt
Yes, You Need a Pencil Skirt
Anthropologie’s WFH Edit Is 40% Off Right Now
52 Celebrities Who Mastered ﻿'80s Fashion
Shop Adidas' Sale for Cute Home Workout Outfits