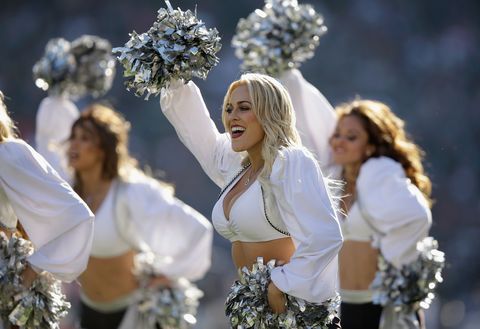 Update, 9/9: Lacy Thibodeaux, a cheerleader for the Oakland Raiders, recently told The New York Times that she only made $125 per game during the 2013-2014 football season. "Your contract states that you're not allowed to talk about your money," she told the Times. "They think it's a joke, 'Oh, these little cheerleaders.'" *shakes fists angrily*

Although Thibodeaux told the news outlet that cheering with the Raiderettes has been a dream, she points out that they never paid for her travel expenses, mandatory promotional events, or calendar shoots. Which leads us to ask: How was she supposed to pay for all that herself when she made approximately $2,000 for an entire season's worth of work? "My contract was highly illegal," she said. Spokespeople for the Raiders have yet to comment on her claims.

Current and former NFL cheerleaders have been calling out NFL teams for equal cheerleader compensation since the league awarded its commissioner, Roger Goodell, an eye-watering $44 million in compensation in 2013.

This isn't the first time unfair wages for the NFL's cheering squads have come to light. The Buffalo Bills, Cincinnati Bengals, New York Jets, and Tampa Bay Buccaneers have all faced lawsuits from cheerleaders. Shouldn't these be signs for change?

Original, 7/17: You know it's hard out there for cheerleaders when a law that guarantees you minimum wage is considered a victory. BuzzFeed reports that a California bill was just passed that gives professional cheerleaders basic benefits like minimum wage and sick leave.

The bill was introduced by state Assemblywoman Lorena Gonzales, a former college cheerleader, who had it added to the state's labor laws. "We would never tolerate shortchanging of women workers at any other workplace. An NFL game should be no different," Gonzalez said in a statement.

Before this, they were seen as contract employees, with employment at will. That means they weren't entitled to certain rights—even rights that other workers, like stadium employees, could claim.

Things were so bad before this that an Oakland Raiders cheerleader filed a lawsuit, saying she and her coworkers were paid less than $5 an hour, not reimbursed for travel or business expenses, and forced to work unpaid for charity appearances. The team settled for $1.25 million in back pay.

But the problem extends beyond California. Five former Buffalo Bills cheerleaders filed a lawsuit of their own last year, claiming they were paid under minimum wage and that the team exploited their labor.

Unfortunately this law is limited to California, so cheerleaders in other states are out of luck. But Gonzalez says she hopes the NFL will see this law as a wake-up call and give the rest of its cheerleaders a much-needed break.