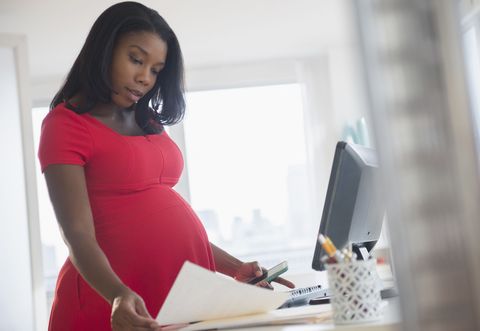 This is from Lenny: Feminism, style, health, politics, friendship, and everything else from Lena Dunham and Jenni Konner. Like it? Share it with a friend.

I was at a wedding this past weekend, and I ran into a heavily pregnant acquaintance. I asked her how she was feeling, and she said the worst, because pregnancy can be a miserable heartburn-and-sciatica-filled horror show. I also asked her about her maternity-leave situation, because I have reported so frequently on parental leave, and because I am nosy. She told me it was paltry. There was a deep eye roll, a sigh, and an explanation that she worked for a start-up.

Many start-ups, because they're trying to run so lean, don't even have HR departments. And even if it has an HR department, a company with fewer than 50 employees isn't legally bound to give pregnant workers any leave at all. That's the fine print on the FMLA (the 12 weeks of unpaid family leave granted to new parents in the U.S.): if you work for a very small company, it doesn't apply to you. That leaves out two-fifths of the workforce, because it is a garbage law (compare U.S. leave policy to the policy of basically any other country in the world and weep).

The three leading Democratic candidates for president all want paid family leave at the federal level, but unfortunately, we're quite a ways from enacting it. In the meantime, what do you do if you're in the family way and you either work for, or want to work for, a start-up? I asked Phoebe Taubman, the senior staff attorney at A Better Balance, an organization devoted to advancing the rights of working families, for her advice about negotiating a leave at a company that doesn't have to give you one at all.

If You're Pregnant and Applying for a Job

Though it might seem squirrelly, Taubman says that you should not disclose your pregnancy until after you have the offer in hand. "There remains a fair amount of bias in the workplace based on pregnancy or motherhood," Taubman explains, so if you tell them you're pregnant while you're in the application process, they may not hire you at all. (Pregnancy discrimination is so rampant, a new website called Pregnant Then Screwed has emerged so women can share their stories and raise awareness about it.) While pregnancy discrimination is illegal, it's very hard to prove, so wait until you're discussing your benefits package to ask about maternity leave.

How to Negotiate Your Leave

If you're already working someplace and you're in need of leave, first, do your research. Even though the FMLA might not cover you, there may be state and local laws that do. For example, New Jersey, California, and Rhode Island all have paid-parental-leave laws, and Iowa expands unpaid leave to companies that have four or more workers. A Better Balance has a full list of state-by-state laws here. If you are in a union (unlikely for employees of very small companies), check your union laws. If your company has an employee handbook, look there as well.

Let's say you live in a state without coverage beyond FMLA and your company seems to have no policy in place for parental leave. As part of your research, you should discreetly ask your coworkers what kind of leave was given to people for other kinds of disabilities. Maybe Dave over in IT broke his leg skiing and was given a month of paid leave and another month of unpaid leave. The Pregnancy Discrimination Act is a little murky on this point, but it does say that women affected by childbirth "shall be treated the same for all employment-related purposes, including receipt of benefits … as other persons not so affected but similar in their ability or inability to work." Taubman cautions that this isn't a sure thing — you might not be entitled to the same leave ol' Dave got — but "it's worth looking into and poking around a little."

What if your company is only a few years old, and no one has taken leave yet for any kind of reason? Then, Taubman says, look to state and federal laws to inform what you ask for. Doctors and insurance companies say the recovery period for a vaginal birth is six weeks, and for a C-section it's eight weeks. So you should ask for at least that period of time unpaid, if not the 12 weeks given to workers by the FMLA. If your position in the company is very strong and you have enough leverage to ask for paid leave, you can look to the standards in California, Rhode Island, and New Jersey, where the state provides six weeks paid (though not always at your full salary). You can also ask people who work at other companies in your field what kind of leave their employers provide as a kind of benchmark to bring to your bosses.

Only you know your employer. If they're a generally progressive type that just hasn't thought about parental leave, it might be an easy sell. If you think it will be an uphill battle, come armed with research and a game plan. Research such as: according to a 2014 report from the White House's Council of Economic Advisers, "a survey of 253 employers affected by California's paid family leave initiative found that the vast majority — over ninety percent — reported either positive or no noticeable effect on profitability, turnover, and morale." A game plan would consist of who would cover your work while you were gone and how you'd make the transition seamless.

Now I'm Going to Bum You Out

In a just world, your employer would congratulate you on your growing family and give you everything you asked for. In the real world, your employer could give you no leave whatsoever, and you'd have no recourse. For example, Taubman referred me to a story in Babygate, a book she cowrote, about a woman called Helena who was pregnant with twins and was offered two nonnegotiable weeks of leave by her small employer. She needed a C-section and understandably wanted more than two weeks to recover. She ended up "choosing" to leave that job, but it wasn't really much of a choice at all.

Employers like Helena's are why nearly a quarter of working mothers in the U.S. go back to work within two weeks of giving birth. This is criminal. At the first Democratic presidential debate, Bernie Sanders called America's lack of paid leave "an international embarrassment," which it is. It's also holding women back. Women who get paid leave are more likely to stay in the workforce, and have higher-paying jobs, than women who don't. There's nothing more inspiring than a pissed-off pregnant lady, so get motivated by the women like Helena who are going without leave, and start lobbying your elected officials.

Jessica Grose is Lenny's editor in chief, and was once a pissed-off pregnant lady.

Lenny is an email newsletter founded by Lena Dunham and Jenni Konner, the creators of HBO's Girls. Subscribe now at lennyletter.com.