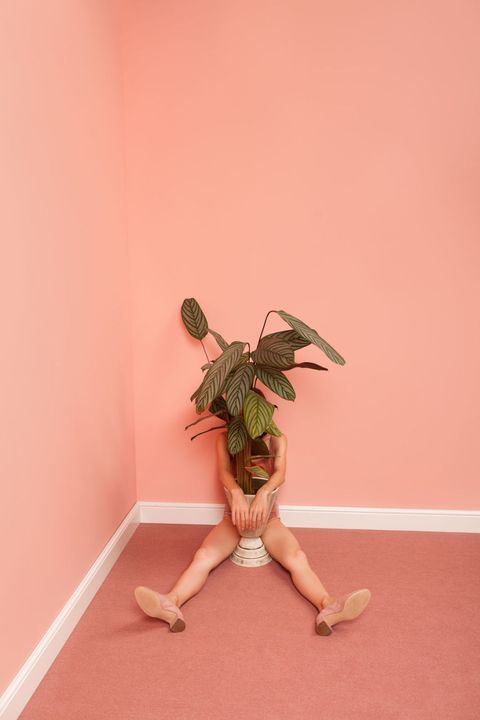 Every time I pulled out my food stamp card from my Louis Vuitton purse at the grocery store, I anxiously looked over my shoulder to see if anyone I knew was around me. As I quickly scooped up my carefully budgeted food for the week, I often wondered if the store clerk judged me or assumed I was scamming the system—I definitely didn't look like I had a disability. And they were right.

Just months before, I'd lived in a luxury apartment in Hollywood. I had a great career making a six-figure salary as a senior editor for an entertainment magazine. I was the woman you envied: single, healthy, happy, attending red-carpet parties with celebrities, traveling the world at a moment's notice.

And then it was all taken from me.

"Even though my boyfriend could see how ill I was, he brushed it off. It was probably just the flu, he said."

In the spring of 2012, I started dating this guy. He was my dream man: funny, smart, good looking, wealthy, charming, and we both shared a great sense of adventure. He took me yachting in San Diego, skiing at the famous Squaw Valley in Lake Tahoe, and wine tasting in Santa Barbara. Our dates rivaled The Bachelor.

But then I started to feel sick—and I couldn't figure out what it was. At first I thought I had a yeast infection or a bad UTI. But when I started to experience more serious symptoms—stiff neck, nausea, headaches, fever, confusion—I knew something was very wrong. Even though my boyfriend could see how ill I was, he brushed it off. It was probably just the flu, he said.

That fall, I was diagnosed with viral meningitis, an inflammation of the areas surrounding my brain and spinal cord. But then the real bomb dropped: My doctors determined that my meningitis was triggered by genital herpes. Which my then-boyfriend had infected me with.

He, of course, denied it, adding a whole other layer of confusion and complication to an already fraught diagnosis. He sat with me at appointments and told all my doctors with a stone-cold expression that he was "clean."

So tests were commissioned again. My health history was scrutinized a second or third time as doctors nodded at him trustingly and went back to the drawing board to make sense of my symptoms.

His deceit delayed my diagnosis and necessary treatment. Between my ex lying and my doctors scrambling, my condition developed into life-threatening meningoencephalitis—an inflammation of the brain that could kill me, or if I survived, could cause lingering complications.

All at once, I was confused, terrified, angry, and heartbroken. Never had I felt so betrayed.

My boyfriend continued to keep up the lie that he was clean for months, even though I knew better. I stayed with him because I wanted him to admit it—to admit that he lied to me and knew all along why I was so sick. Finally he confessed that he not only has genital herpes but also oral herpes, and that was the final straw.

At the same time, I had another nightmare to face: My job was being compromised. My brain was so inflamed that my reading, writing, memory, and vision were dramatically impaired. This is, as you can imagine, highly problematic for someone who writes for a living.

I ended up losing my job. I had no health insurance.

Very quickly, I found myself up to my eyeballs in medical debt. When I couldn't even afford my apartment anymore, I hit a real breaking point. With no steady income, I had to leave. But I wasn't sure where I could go.

That's when I collided with the weird, uncomfortable, and conflicted pride of taking "handouts." I needed help to survive, bottom line. But asking for it made me feel like a fraud. There were people in more dire circumstances. People who had never had the opportunities I'd had.

But my new reality was undeniable: I couldn't work because of my newfound condition. I couldn't make money to afford a place to live.

All the while, the medical bills mounted. I had to go to two separate hospitals for adequate treatment and that's when I learned the worst of all of it: I had permanent brain damage. All from untreated herpes.

Now, I would need even more resources to recover—or at the very least, function.

I spent an entire summer, with diminishing brain function, applying for charity programs that assist people who don't have health insurance, while living in low-income housing and taking unemployment assistance. My life became a blur of paperwork—even though I could barely read.

"that's when I learned the worst of all of it: I had permanent brain damage."

Slowly, thanks to nothing but unrelenting determination and *lots* of squinting, my life started to come together, piece by piece. I was approved for the charity programs and my medical bills were covered. I was given short-term disability, which was another little miracle.

Four years later, I'm just starting to emerge from this financial hell hole—and seek justice. I've pursued criminal charges against my ex for knowingly infecting me with herpes and preventing my swift diagnosis and treatment. There's finally some money coming in. Ultimately, I was able to get back on my feet.

Even though going public with my case was personally humiliating, I needed to expose him—and not just for me. I wouldn't wish what happened to me on my worst enemy. So now, in addition to fighting for my own life back, I'm doing everything in my power to stop the lives of other young women from being ruined.

I'm happy to report that I'm making great strides on both.