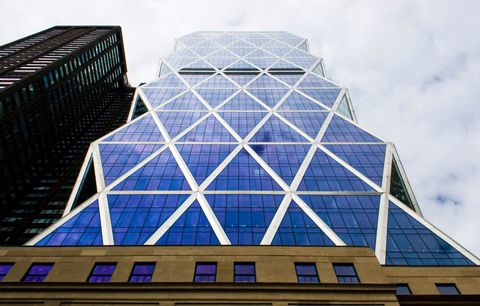 Pride moment: We here at Marie Claire feel pretty lucky to work in Hearst Tower. Not only is it one of the most iconic skyscrapers in the city, but it was the first building commissioned after 9/11, was designed by Pritzker Prize-winning architect Lord Norman Foster, and became the first structure to receive both Gold and Platinum LEED certifications, meaning it's environmentally friendly and efficient as hell.

We're perched on the 34th and 19th floors of the building, and can see Columbus Circle and Central Park from our windows. Actually, we have a pretty killer 360-degree view of the Manhattan skyline. (Also, there's a gym here, which, like, amazing??)

To mark the 10th anniversary of the building's completion, parent company Hearst has made a super cool video tour of our space. So yeah, you're literally flying through the air on the back of a tiny helicopter. Check it out:

Jessica Pels Editor-in-Chief As the editor of Cosmopolitan, Jess oversees the editorial for all of Cosmo's efforts across print, digital, video, and emerging platforms.
Advertisement - Continue Reading Below
More From Money & Career
Birchbox Boot Camp
The Couple With a Hugely Successful Finance Blog
Couples + Money
Advertisement - Continue Reading Below
Dating When You're $120,000 In Debt
How to Lead a Big Meeting With Confidence
The Couple Who Paid Off 21 Credit Cards
Couples + Money
How to Handle Being the Breadwinner
I Started a Company to Pay My Medical Bills
Shan-Lyn Ma Is Here to Save Your Wedding
These Mantras From Powerful Women Are So Inspiring
Created for From Marie Claire for Created by Marie Claire for
Stitch Fix
The Couple Who Paid Off $114K of Debt in Two Years
Couples + Money