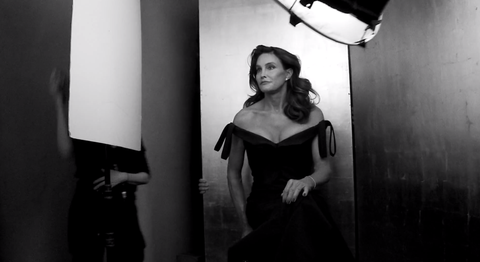 When reporters began calling her in February asking about rumors of her son's transition, Esther Jenner told them she was proud of him more than ever and that "it takes a lot of courage to do what he's doing." The 88-year-old widow's tune hasn't changed now that Caitlyn Jenner has revealed herself to the world in the July issue of Vanity Fair.

"I was there last week, well actually, I got home a week and a half ago," Esther told Access Hollywood. "And I met Caitlyn. She is…so much more at ease."

But, as Esther said to the Associated Press months ago, "it's difficult to wrap your mind around it," which explains why she's still calling Caitlyn by her birth name.

"His father and I named him [Bruce]," she said. "It's going to be a struggle for me to get used to the change, but happily so…I'm very happy for him—or her!"

Brava, Esther. We could use more people like you in the world. See other inspiring reactions here.

Chelsea Peng I'm Chelsea Peng, the assistant editor at MarieClaire.com.
This content is created and maintained by a third party, and imported onto this page to help users provide their email addresses. You may be able to find more information about this and similar content at piano.io
Advertisement - Continue Reading Below
More From Celebrity
Charles Is Reportedly “Aggrieved” With Harry
Adele Stuns in Rare Birthday Photo Dump
Advertisement - Continue Reading Below
Serena and Olympia Twinned in Swimsuits Again
Joe Jonas Opens Up About Parenting Daughter Willa
Kourtney & Travis Have Talked About Marriage
Meghan's Author Bio Includes the Sweetest Detail
46 Moments That Changed the Royal Family Forever
Chloe From 'Too Hot to Handle' Is in 'The Circle'
Why Meghan Wasn't at the Vax Live Concert
A TikToker Went Viral for Un-Matching Ben Affleck