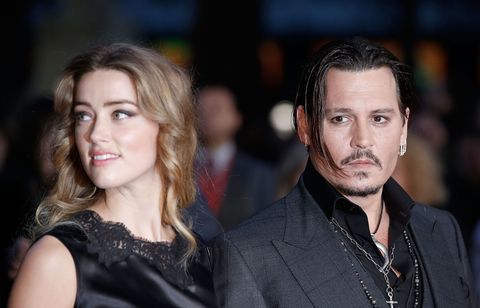 Following accusations of domestic violence during their short marriage, a video has been released allegedly showing Johnny Depp engaging in an argument with his wife, Amber Heard. The video—which appears to depict Depp kicking cupboards as Heard secretly films him—was released by TMZ, but was not leaked by Heard or her legal team. At least, that's what she's claiming in a lengthy appeal for privacy—something her relationship has often lacked, as you can see from the below photo.

Heard's statement on the matter follows:

"I am not responsible for the release of the video. It was not what I wanted and I am doing what I can to force the media to take it off the internet. I underestimated the toll that this difficult few months have taken on me, emotionally and physically, and the efforts made by the media to intimidate and discredit me. It is for that reason, and my desire to make the healthiest choice for myself, and hopefully for Johnny, that I am attempting to resolve this matter in the most private way possible."

Heard and Depp's domestic violence hearing is scheduled to take place on Wednesday, August 17. E! reports that both sides are preparing for the case to go to trial.