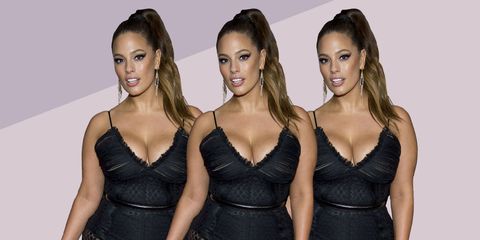 Hands in the air if you grew up with the words "smize" and "booty tooch" in your lexicon? Such is the profound influence of America's Next Top Model. The reality show has been around since 2003, but its new incarnation—airing Monday nights on VH1—has a few changes in store. One: Trya Banks handed her hosting baton to Rita Ora (FYI, Tyra Mail is henceforth known as Rita Oracles). Two: a new group of judges are taking over—including model Ashley Graham.

MarieClaire.com spoke to Graham about what's in store for Cycle 23, and more importantly how the show will be influenced by her particular (and endlessly inspiring) brand of body positivity. After all, being a model in 2016 means using your voice to create change, and using it loudly.

Marie Claire: So many models are using their platform to create awareness about important social issues. Will you encourage the models on ANTM to voice their opinions?

"If you want more, go get more. If you have to get a louder voice to do it, so be it. By being given one opportunity, I've actually found my voice in a bigger way."

Ashley Graham: "Yeah, 100 percent. I think it's important that models understand it's not just about being a pretty face anymore, it's about having a voice that's going to change the industry in a way that they see fit. For me, I saw a window where I wasn't getting offered editorial jobs, and I wasn't being looked at as a girl who was more than a catalogue or dot com girl, because that's where I was put by an agent. If you want more, go get more. If you have to get a louder voice to do it, so be it. By being given one opportunity, I've actually found my voice in a bigger way."

MC: You promote the idea that everyone is beautiful and all bodies should be celebrated (AKA: the truth), but at the same time this is a competition. How do you approach the judging process with that in mind?

AG: "We took every girl for face value and listened to what her dreams, goals, and stories were. It wasn't just coming to the panel with a beautiful photo. It was, 'What are her goals, dreams, and aspirations? How far has she gotten along with those without America's Next Top Model? And what are her plans after she wins? Some of them had what it took, some of them didn't. The ones who didn't started to realize, 'There's a whole other opportunity beyond being a pretty face that I have to understand about myself.' A lot of girls on the show grew to understand who they were and what they wanted."

MC: Can you talk about the importance of social media as a model in 2016?

AG: "Social media is huge. I wouldn't be where I am today if it weren't for social media. It's given me a platform and a voice, and it's a place for me to connect with my fans, let them know what I'm thinking, and what I want changed in the industry. I think that's portrayed to these girls—only two of them had high numbers of followers, and they knew the value of social, so it's really interesting that even the younger generation of girls didn't have many followers. We made it very clear to them: it is about the followers. It is about your voice."

MC: How will you deal with social media bullying? The reality is, being a celebrity in 2016 comes with online trolls.

AG: "I think as you rise in any career you're open to bullying, but on social media it's enhanced because people think they're experts. The advice that I gave the girls was, you just have to stick to your guns and take everything with a grain of salt. The fashion industry isn't always going to be nice to you, and people on social media aren't either. It's all about how you handle the situation and how you let if affect you. You can get upset about it, or you can just thrive and brush the haters off."

MC: Are you worried you'll accidentally make someone cry?

AG: "There is one moment where I'm giving advice to a young girl and I start crying before she does. It's a sensitive subject and something very near and dear me. It was a conversation the panelists and I had to have with her. I don't even think of myself as a crier, but when you have these vulnerable moments, and you see how badly they want it, and how hard they want to get to the top, you feel for them. I've been told, 'No you can't, you're too fat, you're not good enough.' At the end of the day, we're coaching them and telling them how to get there when it's difficult. You will see tears shed, but it's all for a good cause."

MC: Where does smizing stand in ANTM's new incarnation?

AG: "Tyra started ANTM and Tyra started the smize, so of course we're smizing. But you know, we're also bringing new aspects to the show because this is a new and improved America's Next Top Model!"