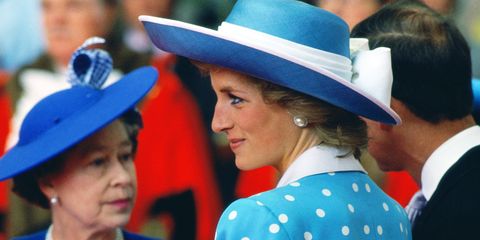 On Monday, People announced the debut of an upcoming Princess Diana-themed documentary series, which is set to air on ABC in August. The four-hour special will be divided into two parts and feature interviews with the late royal's peers.

The documentary special will pay tribute to the princess on the 20th anniversary of her death at age 36, when her car crashed in Paris on August 31, 1997. Today, Diana is remembered not only as the Princess of Wales, but also as a mother and humanitarian. Diana's sons, Prince William and Prince Harry, will also honor their mother's generous impact on society with a statue, which is to be erected on the grounds of Kensington Palace. The date for the statue unveiling has not been set, but is expected to take place this year.

"Princess Diana has appeared on the cover of People 57 times—more than anyone in the history of the People brand," Jess Cagle, People's Editor-in-Chief and Time Inc.'s Editorial Director, Entertainment and Style Group said in a statement. "Our audience has an insatiable appetite for news about the royal family. In fact, they are just as fascinated today as they were when Lady Diana was first introduced to the world back in 1981."

In addition to the new Diana series, she will also be celebrated in England through a series of year-long events sponsored by The Diana Award, a charity inspired by Diana's humanitarian work. One of the events will include a National Kindness Day celebration in March, according to the UK's Express, which will honor Diana's loving spirit and to inspire people to do something for others.

This content is created and maintained by a third party, and imported onto this page to help users provide their email addresses. You may be able to find more information about this and similar content at piano.io
Advertisement - Continue Reading Below
More From Celebrity
How to Copy Katie Holmes' Effortless Style
Chrissy's Red Lip Look Is Perfect for the Holidays
Advertisement - Continue Reading Below
Kate's Blazer and Sweater Combo Is So Chic
Princess Diana's Brother Called Out 'The Crown'
Ciara Talked Her Painful Pregnancy With Baby Win
Hailey Bieber Wears Sultry YSL for Her 24th Bday
J.Lo's AMAs Number Caused Censors to Freak Out
Gigi Shares New Photos of Her Baby Girl
Um, Why Is the Weeknd's Face Bloodied at the AMAs?
Gwen Stefani Walked Off on 'The Voice'