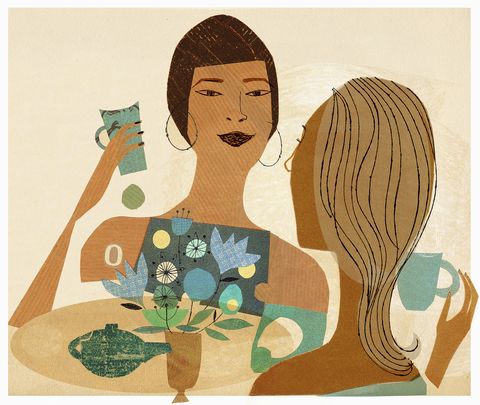 Robin Seiler is a key engineering lead for Microsoft’s Surface family of devices, one of the few female senior leaders in engineering, and she's learned a thing or two about mentorship over the past two decades of helping young people early on in their careers. Here, she discusses what it really takes to develop a successful mentor/mentee relationship—it's basically like dating.

My first year out of college, there were quite a few nights that I literally slept under my desk. That's when I decided that maybe IT wasn’t the best place for me. I probably changed careers four times: I did software development in Singapore. I did marketing. I did sales. Then I moved to Microsoft. First business, then more marketing, and then program management and engineering. I didn’t go back and get a new degree every time I made a change. If I look back in terms of the job changes I've made, my best moves were outcomes of relationships that I built and fostered. When I moved from IT to marketing, I moved because my manager, who I had a great relationship with, asked me to come with her.

Typically, I’ve found that the best way to get a new job is by building a very strong network of people, plus knowing what you’re good at—and when I say “knowing what you’re good at,” it’s not what your degree is or what technical skills you have. It’s the soft skills you have. I know that I’m a simplifier; I can organize anything, and I can simplify anything. That means with any ambiguous thing that has to be sorted out, I can usually jump in, connect some people, figure out a path, and then direct. Once you figure out your soft skills, you can start to think about the mentor strategy that you need to have.

There are three kinds of mentors.

1) The mentor who helps you with the job you have today.

This might be a peer or somebody who observes what you do from a different position. It may even be a subordinate. That kind of mentorship comes from lots of places.

2) The mentor who helps you with your future job.

I had a mentor when I worked in Singapore, he was the country manager, and one day he walked me through his strategy. He basically had an org chart of the leadership of Microsoft and had flagged who were sponsors of his, who he had relationships with, and who he needed to develop relationships with so that, based on what job he wanted to do, he knew whether or not he had a path.

While I’m not as organized as that, I do believe you should pick two or three areas that you think you want to work in next. It might be in the same field that you’re in, the same company that you’re in, or it might be in a different field or different company. A year or two before you want to move, set up a mentor there, so that you’re able to understand the leadership of that organization, the culture of that organization, and what the typical roles are. It also means that when you’re ready to change, if they have an opening, you’re already on the list because you've developed the relationship.

3) The mentor who's involved in your day-to-day work.

There’s a category of people that you work with day to day, and there's usually a person who is most critical of your work. Think of any presentation that you give...there’s that one person who's asking all of the super hard questions that make you feel a little bit embarrassed in front of a group of people. Always ask that person to be a mentor. They clearly have feedback for you, and they’re clearly willing to give you that feedback unfiltered.

What you’ll typically find is that as that relationship evolves, they will start feeling more accountable for your success—after all, they’re helping you. Suddenly, all of those meetings that you have, every presentation that you give...that person may still have feedback, but the feedback might happen after the meeting instead of during the meeting, which makes things a lot easier. One of the biggest challenges today is that people are scared to give feedback. And you actually need it to get better.

How Much Experience Is Needed to Become a Mentor?

There was never a point in my career where I felt like I had enough professional experience to help others. Mentorship starts before you realize it, like when you're hanging out and getting a coffee with your peers, and somebody says, “I’m having a really hard time with this—what should I do?” That is actually the first moment you step into mentorship.

I think about mentoring like dating—you don’t know on the first meeting that this is someone you want to meet with once a month. And it goes for both the mentor and the mentee. Find a couple of people and buy them coffee, see if you connect. If you don’t connect, you’re not going to take their advice. The relationship that builds is mutual. I, for sure, have had people who have asked me to mentor them and I've said, “I think there’s probably a better fit for you.”

What Are Some Challenges of Being a Mentor?

Anytime you’re giving personal advice, you’re potentially influencing someone’s life. And you have to take that seriously. When I started in tech, rightly or wrongly, the perception was that you don’t ask for a promotion...ever. I asked for my first promotion about 10 years ago. It was empowering. You realize that magic happens when you actually make it clear what’s important to you. Now, every time I have one of those conversations [with a mentee], it’s a challenge for me because it’s one [thing] that took me so long to get to personally. At the same time, I need to give them the perspective that promotions are intended to set you up for success, not just be a paycheck.

Mentee Tip: If you don't think there's a connection with your mentor, give them an out, but be clear that you want a commitment.
Klaus VedfeltGetty Images

Anyone who’s in a manager position is already a mentor because, in reality, you have to mentor your staff every day. You don’t get to be a manager and not give advice on how to be better. Mentorship is an interesting thing because it’s as much listening as it is talking, if not more. For someone who hasn’t mentored or managed people before, they need to take a moment to listen to what the person is asking for. Understand what they want from the relationship. Understand where they’re struggling. The conversation that they have can sometimes be helping the person put the pieces together for themselves.

Just like how you use friends as a sounding board, a mentorship oftentimes is a professional sounding board. What I tell people who haven’t done it before is to think about their best relationship with a friend. What do you get out of it, and how do you bring the good stuff that you get out of that into a professional relationship of mentoring? It has a lot to do with listening—not spending a lot of time telling them how to fix it, but giving them a way to think through it.

The Dos and Donts of Mentorship

Mentor Tip: If you're too busy to handle more requests from mentees, try and personality match them with other people in your industry.

The most important lesson I’ve learned as a mentor is that listening is a priority. So many people think that when they first start mentoring their job is to give advice. Your first job is to listen. The other thing that you don’t really learn until you go through it a few times is how important the role of a mentor is. Different people get different value from it. For some, it’s stabilization when they’re frustrated. For some, it’s emotional support. For some, it’s confidence. Very few of these things are, you know, how to build a spreadsheet or do the job as it’s defined today. Mentorship tends to be about the softer skills or emotions.

I, as a mentor, will typically reach out if, in my daily interaction, I see a mentee, and it looks like they’re struggling. I’ll just say, “Hey, do you want to grab some coffee and have a chat?” Also, if I'm seeing them do a great job on something, I will make sure to send them an email just as a positive reinforcement of something we had talked about so they see value out of that relationship for more than 30 minutes once a month.

The manager that helped me move into marketing? I’m still in contact with her today, and that was 20 years ago.

Related Stories
8 Things You Should Always Do After Networking
Roth IRA vs. 401K: Where to Stash Your Cash
This content is created and maintained by a third party, and imported onto this page to help users provide their email addresses. You may be able to find more information about this and similar content at piano.io
Advertisement - Continue Reading Below
More From Money & Career
The Founder Who Got Meghan Markle to Invest
Event Planners' New Plans
Advertisement - Continue Reading Below
A Day in the Life of the Super Bowl Referee
Created for From Marie Claire for Created by Marie Claire for
Activia 2017
Meet the Woman Leading the Super Bowl LV Flyover
Marcella Nunez-Smith Is Tackling COVID Equitably
140,000 Jobs Were Lost In December—All Women's
Allison Statter Is More than Kim Kardashian’s BFF
Questions to Ask During a Job Interview
The Woman Behind Thousands of Small Business Loans
Created for From Marie Claire for Created by Marie Claire for
Bank of America
You Can't Pick Produce on Zoom