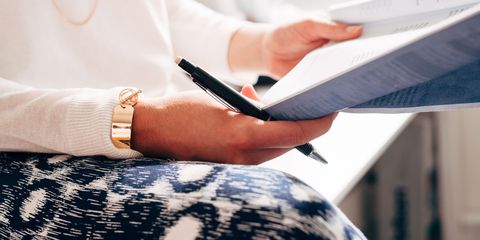 We've all been trained to avoid giving out too much personal information when we're on the job hunt. But according new research from Vanderbilt University, it's better to get real about gaps in your résumé—and being honest could actually land you the job.

"Our study provides the first-ever evidence that women who conceal personal information dramatically lower their hiring prospects," says Joni Hersch, professor of law and economics at Vanderbilt Law School, about women who take time away from their careers to raise kids. In other words, being forthright about stepping away from work in favor of family actually works—refreshingly—in women's favor.

"I was shocked by the results," says Hersch.

Hersch and assistant professor Jennifer Bennet Shinall had 3,022 subjects act as potential employers and asked them to choose between two female job candidates. Each résumé had a 10-year gap in job history. A personal explanation—taking time off to have a child or a get through a divorce—was given for some of the candidates. No explanation was given on the other résumés.

The job-searchers who gave the personal info had a 30-to-40 percent increased chance of being hired, according to the findings.

"I was shocked by the results," says Hersch. "The personal information gave no indication whether the woman would be a more or less productive employee. This was entirely neutral information. Yet the number of people who preferred the woman who explained her résumé gap was staggering."

It makes sense when you think about it: Employers would rather know the full story than to take a gamble on an unknown risk. So be proud of all the work you've done—in an office or otherwise.

Learn more about the study here: