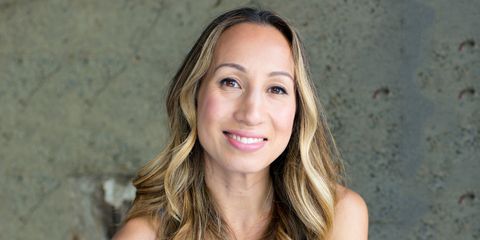 ICYMI: Last weekend, Facebook teamed up with Gucci and Global Citizen for the third annual Chimehack, a hackathon with the mission to help end violence against women. In a room of full of hackers and some really inspiring activists working hard to make positive change, we couldn't help but add some major new life goals to our list. In the midst, we caught up with Naomi Gleit, the VP of Social Good and one of the first employees *ever* at Facebook, to better understand just how Facebook plans to make the world a better place.

Naomi Gleit: I was the first product manager at Facebook when I joined nearly 11 years ago. I started working as a product manager first focused on growth and now on social good. Core Growth works on getting everyone in the world onto Facebook by removing barriers preventing people from joining Facebook. One of the first projects I worked on was open registration, which allowed anyone with any email address to join Facebook, and since then we've moved from only being open to colleges to being open to everyone.

The Social Good team is focused on building tools and features that are good for the world. We already see great things happening on Facebook everyday and this team is making these things easier. One example from earlier this year is how we already saw people raising money for causes they care about on Facebook, so we wanted to make that process even easier. To do that, we created a product called Fundraisers, which allow supporters to set up a dedicated page to share their story, tell others about a nonprofit's mission and rally around a fundraising goal.

"We already saw people raising money for causes they care about on Facebook, so we wanted to make that process even easier."

MC: How did that lead you into being involved in projects like Chimehack?

NG: We were really excited to host this event. Hackathons are a key part of Facebook culture since the beginning, because we believe technology is critical to solving some of our biggest challenges. In fact, Safety Check—one of our key social good products that gives people an easy way to say you're safe and check on others after a disaster—was built during a hackathon.

I'm very proud to work with an organization that is so focused on empowering women and girls—something that I feel very passionate about. By breaking down barriers to reporting violence against women— technology solutions can play a major role in reporting gender-based violence and potentially leading to policy reform and shifting cultural norms.

Hackers being welcomed onto Facebook's campus for Chimehack3
Getty for Gucci

NG: Diversity of background and thought is still really important here at Facebook. We're building products for people around the world, so we need our employees to reflect the world we're building for. The more diverse skill-sets and perspectives we have, the better our products will be.

MC: What are the goals/priorities for Facebook and how does what you do reflect that?

NG: Facebook's mission is to give people the power to make the world more open and connected. We already see people doing good things on Facebook, but my team knows that there's more we can do to make it easier to allow more people to do more good in the world.

"Facebook's mission is to give people the power to make the world more open and connected."

MC: How do you see Facebook developing in the future?

NG: Our team is focused on seeing what people are already doing for good on Facebook and doing what we can to make it easier and strengthen the impact people can have. The Social Good team is currently focused in two areas—charitable giving and crisis response. Initially when we started, Facebook would determine when tools like Safety Check and Fundraisers would be activated, but our goal has always been to empower people to use these tools.

MC: What do you think is the most powerful aspect of technology/social media when it comes to social change?

NG: I think the most powerful aspect of social media when it comes to social change is that it connects people. And when people connect on Facebook, wonderful things happen.

We see this every day. People use Facebook to raise awareness and support for causes they care about—and they motivate others to do the same. People raise money for disaster relief, they search for missing children, and they bring attention to the issues that matter to them.