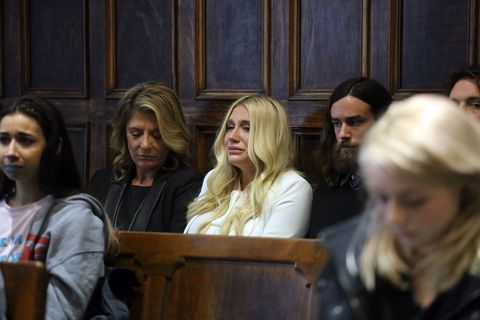 It's been close to a month since a judge ruled that Kesha could not record music outside of her contract with Sony and Dr. Luke, despite her protests that Luke abused her both physically and emotionally. Luke has also denied reports that Sony is set to drop him before his contract expires.

Kesha is generally staying quiet about her court case, aside from giving a speech last week. But Kesha's mother, songwriter Rosemary Patricia "Pebe" Sebert, has now spoken out in a lengthy Billboard article about her daughter's struggles with Dr. Luke throughout her career—and the healing process that's just beginning. Here are five major revelations from the interview.

Pebe compares Dr. Luke to an abusive boyfriend. "She was like a prisoner," Pebe said. "It was like someone who beats you every day and hangs you from a chain and then comes in and gives you a piece of bread. Luke would say, 'You look nice today,' and send her into hysterics of happiness because she was programmed to expect nothing but abuse."

Kesha thought Taylor Swift's $250,000 donation was a scam at first. "It was really random," Pebe said. "Kesha was like, 'Are you sure it's not some scammer?' And then she said, 'I would be honored if she wants to do that.'" The first note came from Swift's publicist, but then Kesha and Swift spoke personally.

Even if Sony drops Luke, Kesha is still tied to him. "Kesha's allowed to work with another producer," Pebe said, "But Luke gets to approve them. He gets to approve of anyone she works with. He has final say over everything. […] Dr. Luke basically owns Kesha until her death."

Kesha was afraid to report her alleged assault to the police. "Looking back, I don't know why we didn't go to the police," Pebe said. "Kesha told me not to do anything. She said, 'Mom, I just want to sing. I don't want to be a rape-case victim. I just want to get my music out.' I didn't follow my instincts."

But Kesha is now in a better place after going public. According to Pebe, she has 30 songs written and ready to go. "She wasn't comfortable with having to do this, but I think she realized as this thing progressed that she can advocate for sexual abuse or other things," Pebe said. "The fact that she is at peace with that has really been healing."

Advertisement - Continue Reading Below
More From Celebrity
The Future of Harry & Meghan's Sussex Royal Brand
Sussexes Announce Plans to Move to North America
Advertisement - Continue Reading Below
Queen Says She's "Particularly Proud" of Meghan
Meghan and Harry Will Still Live at Frogmore
How Meghan Markle and Prince Harry Will Make Money
Harry and Meghan's Royal Exit Is Official
Selena Got Choked Up Reflecting on Her Love Life
Queen's Aides Are Struggling to Finalize Megxit
Katie Holmes Is Struggling With Adulthood, Too
Doria Ragland Says Meghan Will "Always Be Okay"