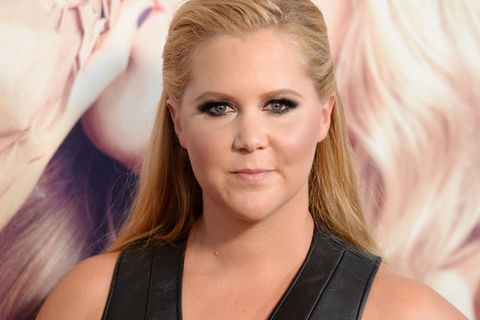 Weirdly, many people assume that women achieve peak happiness when they find a husband and pop out a couple children—preferably named some variation on Saint, Apple, or Pilot Inspektor.

The Trainwreck star was one of one of Barbara Walters' Most Fascinating People of 2015, and was asked by the iconic host where she sees herself in 10 years. Amy responded by saying she wants to direct or produce, and Barbara was quick to point out that she didn't mentioned marriage or children.

"Yeah, well that's what came out," Amy said. "I would love those things, but I don't really see it for myself. I hope that happens, but I don't know how realistic it is."

Best answer ever. Open, honest, and Amy Schumer to a T. Plus (and no offense to Babs), but shouldn't we be at the point where women having career-focused answers to this question is expected instead of surprising?

Mehera Bonner Contributor Mehera Bonner is a news writer who focuses on celebrities and royals.
This content is created and maintained by a third party, and imported onto this page to help users provide their email addresses. You may be able to find more information about this and similar content at piano.io
Advertisement - Continue Reading Below
More From Celebrity
Jennifer Aniston Answered Bizarre Fan Questions
Prince Charles "Really Wants to Meet" Lilibet
Advertisement - Continue Reading Below
Britney Spears Deleted Her Instagram Account
Megan Fox Won't Be Told "What a Woman Should Be"
Jennifer Garner Shared an Emotional Message on IG
Travis Scott Discussed His Parenting Style
Kanye West Unfollowed Kim Kardashian on Instagram
Kate Hudson Is Engaged to Danny Fujikawa
J.Lo & Ben Affleck Kiss in Masks at the Met Gala
Who Is Alexandria Ocasio-Cortez's Partner?