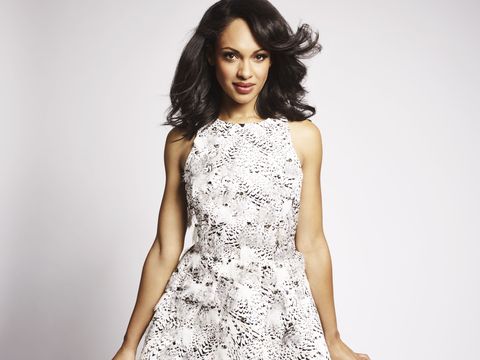 Women comprised just 22 percent of protagonists in the top 100 grossing films in 2015, which is a deeply depressing statistic that has to change. Part of that change is increasing the visibility of women on screen, and part of it is ensuring the roles for women that do exist are devoid of stereotypes—especially when the film's main star is male.

Which brings us to Cynthia Addai-Robinson, who plays Marybeth Medina—the intensely smart analyst charged with hunting down Ben Affleck in The Accountant. The character isn't burned by the tropes that fall on the shoulders of so many women: there's no love story, no boyfriend, and no sexual tension. She's proof that women can be defined by other characteristics—being be baller at their job, solving problems, and—in this case—finding deadly accountants. MarieClaire.com spoke to Addai-Robinson about why working on The Accountant was so refreshing in a landscape where finding great roles can be mission impossible.

Marie Claire: Your scenes in The Accountant were somewhat separate from the rest of the cast's. Did that present a challenge?

Cynthia Addai-Robinson: A lot of my scenes are just me connecting the dots on my own. It's an interesting challenge to portray discovery, and to me it was about giving a sense of urgency for the audience since Marybeth is their way of following along with the unfolding mystery. I had to portray the sense of excitement and build-up to the pivotal moment of how the mystery gets solved.

"You don't have to be just limited to the girlfriend role, the wife role, to having your story be so intertwined with the fate of a male character."

MC: What was it like playing a character that isn't burdened with a romantic story arc? It's a nice reminder that not every girl in a movie has to have a love interest. Some can just be awesome at their job.

CAR: It's a really exciting time right now to see the various ways women are being portrayed. You don't have to be just limited to the girlfriend role, the wife role, to having your story be so intertwined with the fate of a male character. Marybeth is a person who has a history and a past, and is really self-made person. She isn't someone letting her past hold her back, or using it as an excuse. That's really cool and modern, and just feels real and relatable. It's great to get the opportunity to have a juicy female role, and explore things other than what's typical for a female characters go through. Love stories are important and interesting, but you want there to be a full range in the way women are portrayed.

MC: As an actress with a growing platform, how much do you think about being a role model?

CAR: It's something I feel like I'm still learning and sorting out for myself. My natural inclination is to be a bit private. I don't always feel compelled to share my thoughts and my views on social media. That space is still a tricky one to move about in as a female. I've seen the way things can snowball very quickly in a really dark direction. That makes me feel hesitant to even say the most basic things I would feel comfortable saying in a regular conversation. I commend actresses on being brave enough to share their views and not be too worried about what other people think. I get nervous when I think about saying something that would be relatively simply and being trolled into silence.

"The more diversity you have in terms of decision makers, the better your chances of seeing more representation."

MC: The consensus seems to be that TV is more diverse than film, and that film has a lot of catching up to do. How can the industry make more of an effort to accurately represent women, and women of color in particular?

CAR: A lot of it starts with people behind the scenes. The more diversity you have in the area of decision makers, the better your chances of seeing more representation. TV is really exciting, and I've always loved television—even before it became cool. It felt the most accessible. It's the medium in people's homes. It's the medium people watch over several months or years, and you can invest in characters over a long period. When you have a complex character that requires more than two hours to tell their story, that's where TV has the opportunity to shine. Film has catching up to do, but I'd like to remain optimistic that we're in a forward motion.

MC: You had a small role on The Vampire Diaries and a big one on Arrow. What did you learn from being on shows with such mega fandoms?

CAR: Often times, people consume stories when they need a sense of comfort, or an opportunity to escape. When I get responses from people saying, "I watched your show when I was in hospital for several months" or "I watched your show when I was stationed in Afghanistan," those are the times when people are really using TV to feel a connection. That always moves me, when I realize everyone is using a TV show for different needs in their lives. It never ceases to amaze me, some people can cry for characters on television in a way that they can't for their own family dynamic.

MC: You're going back to TV on Shooter, Ryan Phillippe's new show. Should we expect another strong female role?

CAR: In the 2007 film of the same name, my character was a man. They changed it to be female, and it's a similar situation where I get to be this fully realized woman who is strong, and vulnerable, and ambitious. It feels like a modern interpretation of the way many women are in their chosen field.

Shooter comes out November 15 on USA and The Accountant hits theaters on October 14.

Mehera Bonner Contributor Mehera Bonner is a news writer who focuses on celebrities and royals—follow her on Instagram.
This content is created and maintained by a third party, and imported onto this page to help users provide their email addresses. You may be able to find more information about this and similar content at piano.io
Advertisement - Continue Reading Below
More From Celebrity
Kourtney Kardashian Is Dating Travis Barker
Priyanka Chopra Opens Up About Her New Memoir
Advertisement - Continue Reading Below
Priyanka and Nick on Their Quarantine Quality Time
Priyanka Pulls Back the Curtain
Sussexes Will Return to Social Media, Harry Said
A-Rod Celebrated J.Lo's Inauguration Performance
The 6 Most Expensive Royal Wedding Dresses
Inside Kitty Spencer's Stunning £19 Million Home
Meghan Was Hit With Thousands of Vile Comments
Watch Meghan's Candid 2013 Larry King Interview