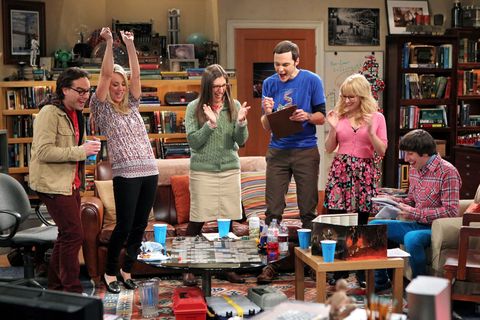 Unless you've been living under a TV-less, internet-less rock for the last decade, you've no doubt heard about CBS' hit The Big Bang Theory. The sitcom is one of the most-watched shows on television and—even if you don't personally enjoy it—your mom/uncle/grandma/insert-relative-here almost definitely does.

Like the stars of colossal TV hits before them (we're looking at you, cast of Friends), The Big Bang Theory squad make bank—but some make much more than others, which is why the cast's salaries have been a tad controversial in recent years. But all that's about to change because rumor has it that the top tier cast are taking salary cuts so their costars can earn more.

In 2014, Kaley Cuoco, Jim Parsons, and Johnny Galecki got huge raises, from $350,000 per episode to a whopping $1 million per episode, according to Business Insider.

At the same time, Deadline reported that Simon Helberg and Kunal Nayyar (who play Howard and Raj on the series) had negotiated their way up to 75% of what Cuoco, Parsons, and Galecki were earning, or about $750,000 per episode.

But Mayim Bialik and Melissa Rauch (who play Amy and Bernadette on the show and joined the cast later in the series) have always trailed behind in terms of salary. In 2013, Deadline reported that the women had negotiated their salaries up to $60,000 per episode, with yearly increases that would eventually get them to $100,000—still way, way behind the rest of the cast in earnings.

This is all to explain why today's news is so, so very awesome. The Big Bang Theory cast are once again negotiating their contracts, and Variety reports that the five original cast members have banded together and offered to take pay cuts of $100,000 per episode each to help close the wage gap that still plagues Bialik and Rauch. Their salaries are currently reported to be in the $200,000 range, but would go up to $450,000 per episode with the money their cast-mates are offering to give up for them.

It's still a far cry from the equal pay these women deserve, but it's a great start and a wonderful gesture on the part of their costars. Your move, Warner Bros. Television/CBS.