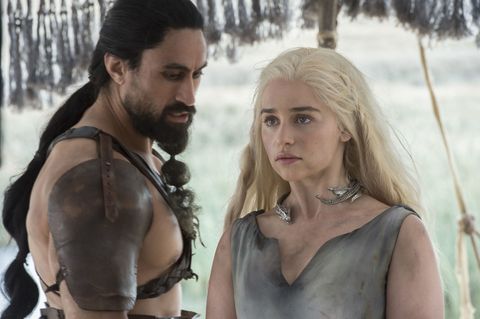 Sure, it's charming or whatever when you drop a casual "merde" into a conversation, but it's a whole other ballgame when you swear in a fictional language you happen to be fluent in because you're a star on Game of Thrones.

In an interview withEntertainment Weekly, Emilia Clarke said that when someone wrongs her IRL, she will imagine a conflagration slowly engulfing his body. True story.

"Sometimes there are particular moments in life when only one word will do. Some people get it and some people don't, and that one word is: "Dracarys" ["dragonfire"]. You're just like, "Dracarys"—and it makes you feel better and the other person has no idea what you're doing. But in your mind, you're setting them on fire. So there's something beautiful about that. And with the swearing, when you're trying to get into a scene and you're forgetting your Dothraki, swearing does come into that. You just make your swearing sound like Dothraki."

Remind us never to cross her. Not that we would.