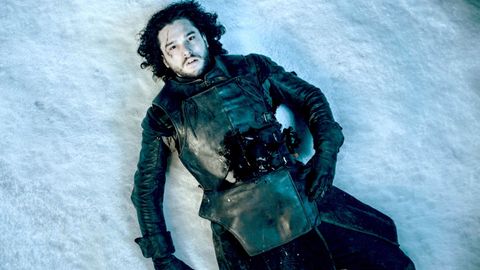 Update, 10/3: Just when we thought we had figured it out (it being the true fate of Jon Snow on Game of Thrones), Kit Harrington's costar, Maisie Williams, has tried to completely kill any last hope that his character might still be alive.

"I think you're in denial about it for a long time when you see the death of a big character but I can't help but think it makes for such a great storyline!" the 18-year-old told Christian O'Connell on his Absolute Radio morning show. "All the time people are asking me if Jon Snow is alive and the answer is no! He's dead! I promise."

Oh really, Arya Stark? So then tell us: What was Kit doing running around Belfast dressed in medieval garb last week? Why did he say GoT "will remain a part of my life for a while?" And why is Emilia Clarke so "optimistic" about his possible return and you're not? We NEED an answer—and preferably one we'd like to hear.

Update, 9/27: Between Kit Harrington's vaguely-stated "Yes, I'm coming back!" confirmation and Emilia Clarke's half-glass-full attitude about the fate of Jon Snow, we've been breathing easier as we've come to accept the fact that our beloved Lord Commander of the Night's Watch is most likely still alive.

While holding on to hope has been difficult for diehard Game of Thrones fans, it seems we finally have actual confirmation that Mr. Snow is, indeed, ready for a reincarnation. The proof? New photos (via The Daily Mail) from the GoT set showing Harrington galavanting around Belfast in costume, sword in hand.

SPOILER ALERT: This Game of Thrones character might not be dead after all http://t.co/wnmju55SS8 pic.twitter.com/sqoZJnKtj6

While he could just be filming flashback scenes (as some pessimistic Twitter users have pointed out), our fingers are still crossed for a full reprisal.

Update, 9/21: Technically, Emilia Clarke has never formally been like, "He dead," but now that Jon Snow himself has basically confirmed that his storyline hasn't wrapped up, she's gotten a bit more free with her predictions.

In the same interview in which she revealed Dany's Pump-Up Playlist for Conquering Cities, she changes her tune from somber to pretty darn confident. ''We've got the red lady [Melisandre]...but what would she bring him back as? She's got to take something for herself. Let's just say I'm optimistic.''

Personally, I'm #TeamReincarnationasaLegendaryHero, but whatever gets us more screen time and less lying-dead-in-a-pool-of-his-blood.

Update, 9/15: Rejoice! Kit Harington spilled the beans about not necessarily being dead to a Belgian magazine probably because he thought no one would see it, but joke's on you, buddy, because we are the internet.

Thanks to a generous, Dutch-speaking Redditor, we now know that KHar Bear (working on it) will stick around for at least the next few years of Game of Thrones. As a reanimated corpse? As a regular corpse they flash back to occasionally to bring the mood down? AS A LEGENDARY HERO WHO VANQUISHES THE WHITE WALKERS ONCE AND FOR ALL, HMMMM? Here's how it went down:

KH: "I had to pass on amazing parts because I was attached to Game of Thrones. So the show is like a double-edged sword to me: I owe a lot to it, but at the same time it has almost completely drained me. Oh well, I try not to think about it too much. The important thing is that I now know exactly how long I am still under contract, and in the meantime…"

Interviewer: "How many more seasons would that be?"

Harington: "Nice try (laughs). I can't talk about that. Let's just say that Game of Thrones will remain a part of my life for a while, I'll probably be in my thirties when it's over. One thing's for sure: the day I'm no longer on Thrones is the day I'll bury myself in movie projects (laughs)."

Helpful Redditor points out that Kitty Kat (I give up), being 28 with a December birthday, will likely be attached to the show for its sixth and possibly seventh seasons, even if he's not exactly the Jon Snow we've come to know and love. Yay! You can stop lurking now, Kit Kat. We see you.

Now, throw in a long-lost twin sister who might not be so long-lost after all and a ladleful of feminism. This is Reddit user ghostchief's addition to the above theory, which, in a nutshell, says Meera Reed is Jon Snow's twin sister, and because he is deaddeaddead, maybe she'll end up being the one true hero to conquer the White Walkers. Hell yes. BUT HE CAN'T BE DEAD. But girl power. Don't make me choose.

Update, 8/13: Okay, so yes, Jon Snow is probably dead. (Maybe.) And sure, there's definitely going to be more deaths. (Undoubtedly.) But according to George R.R. Martin, the ending for Game of Thrones will have *some* sort of triumph.

"It's no secret that Tolkien has been a huge influence on me, and I love the way he ended Lord of the Rings," Martin told the New York Observer. "It ends with victory, but it's a bittersweet victory.... All I can say is that's the kind of tone I will be aiming for. Whether I achieve it or not, that will be up to people like you and my readers to judge."

Update, 7/31: At the Television Critics Association summer press tour Thursday, HBO's president of programming Michael Lombardo landed himself a spot on the America's Most Hated list, probably about 29,374 or so places behind Walter Palmer.

First, he said that, by his estimation, Game of Thrones would only continue for two more seasons but that he'd be open to a prequel if showrunners David Benioff and D.B. Weiss were into it. Then he said his piece re: only-dead-for-now Jon Snow.

"Dead is dead is dead. He be dead," Lombardo said. "Everything I've seen, heard, and read, Jon Snow is dead."

^ OH OOPS HOW DID THAT GET IN HERE. *sloppy wink*

Update, 7/21: I don't want to say I told you so, but I told you so: Jon Snow lives. Why else would the guy who plays him show up for work?

Fan site Watchers on the Wall has been tracking Kit Harington's movements, digitally following him to Belfast, where production of season six is under way.

This, coupled with that warg joke (see below) and the fact that he hasn't been included in this gallery, equals hope unextinguished. What's that now, Arya and David and Emilia? I DIDN'T THINK SO. 👊

Update, 7/11: Even President Obama wants to know if Jon Snow is actually dead. In an interview with EW at Comic-Con on Friday, Game of Thrones director David Nutter said, "Three weeks ago, I was the in the company of the President of the United States. He turned to me, put his hand on my shoulder, and said, 'You didn't kill Jon Snow, did you?'"

The director confirmed the sad news to Obama and the rest of the hopeful GoT fans: "Jon Snow is deader than dead." To which the President reportedly complained, "You keep killing off my favorite characters."

Update, 7/8: Maisie Williams, who should, of all people, have more sympathy since she plays Jon Snow's half-sister and all, has informed us we are fools for wishing Jon Snow would warg with his direwolf/rise from the dead via shadow-baby powers.

During an interview with People Now, the 18-year-old actress was like, "You're all out of luck, dudes." (She was nice and Britishly apologetic about it, though, so that counts for something.)

"We saw him get stabbed a lot in the chest, I think that's pretty clear," Williams said. "People are really hurt by it, but that's what this show does. If you haven't learned that by now, well, I can't help you."

Update, 7/7: In March, Kit Harington and GoT showrunners Dan Weiss and David Benioff gave an interview that briefly touches on the second most popular fan theory re: Jon Snow is only faux-dead, which is that he will warg into his direwolf Ghost.

Now listen to what Kitty Kat has to say here shortly after the 22-minute mark.

Update, 7/6: Yesterday, we lived in a dark, desolate, Jon Snow-less world. Today, not much has changed except America won the Women's World Cup and Kit Harington has given us reason to believe he was lying about never, ever coming back to Game of Thrones. See it and weep happy tears:

HIS HAIR IS STILL SEEMINGLY UNDER CONTRACT. Unless he just prefers it that way. Or he's trolling us again. In that case...

Original post, 6/25: Last week's Game of Thrones season finale also wrecked Emilia Clarke, expert eyebrow manipulator and proud owner of a new bob. "I read the scripts and I cried," Clarke said during an MTV interview that was meant to be about her role in Terminator: Genisys. "I called David and Dan, and I took Kit out for numerous drinks, and was like, 'what the… what the…you're leaving me? You're abandoning us?'" (FYI, he does have another job lined up.)

Wracked with grief, she then did what we all did: rock ourselves gently back and forth while developing a Jon Snow conspiracy theory that, without fail, ends with him being resurrected. "I mean, there are some helpful people there who could bring him on back to life," Clarke said when pressed. "But if it means I'm that much closer to the throne, hey, okay."

OKAY. Now I have to go put that on a notecard and add it to the "Jon Snow Lives" yarn web in my bathroom. Excuse me.

Chelsea Peng I'm Chelsea Peng, the assistant editor at MarieClaire.com.
Advertisement - Continue Reading Below
More From Culture
There's Going to Be a 'Love Is Blind' Reunion
The Author of 'My Dark Vanessa' Shares Her Story
Advertisement - Continue Reading Below
Behold This Beyoncé-Inspired Gymnastics Routine
'The Bachelor' Has Already Finished His Season
An Investigation Into the Next 'Bachelorette'
The Sexiest TV Scenes of All Time
Unmissable Horror Movies Coming Out This Year
Treat Yourself to a Chick Flick Tonight
Who Will Be on 'Bachelor in Paradise' in 2020?
Can We Talk About Kelly's Mom From Love Is Blind?