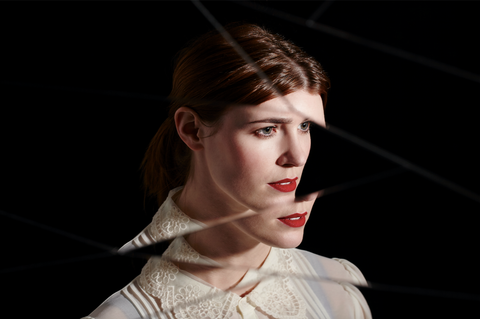 You don’t need to experience a migraine to know it’s the worst. The pain, the psychological aftereffects, the paranoia that the next one might be lurking around the corner like a sinister phantom—it’s crippling. Even worse: There’s no cure. That’s why writer-director Susanna Styron, 63, endeavored to make Out Of My Head, a documentary about the realities, challenges, and stigmas of living with migraines, as well as the underfunded medical research underway working to better understand this mysterious chronic illness. Susanna was inspired by her daughter, Emma Larson, 29, a migraine sufferer and one of the central subjects of the film. We talked to the pair about their experience on- and off-set, what a migraine really feels like, and what non-sufferers need to know.

On working together as documentarian and subject

Emma Larson: I didn’t think about it. I was just having some conversations with my mom.

Susanna Styron: Originally Emma was my test subject because she was available and she had something to say about it—and she was so great and eloquent and kind of Emma. It took 8 years to make and, at first, I resisted the idea of it being anything other than an objective documentary, so Emma was just a person in the film. Then we realized it was really going to be a much more powerful film with our story and our voyage together as a centerpiece.

Another thing that Emma provided was help pointing out things we can’t put on the screen because people who suffer from migraines just can’t look at it.

EL: I remember you showing me stuff, especially with the migraine art, and thinking, This is too good; it really makes me feel like I am having a migraine.

On conveying what a migraine really feels like to audiences

EL: There is the physical experience and the psychological experience. I get two kinds: the kind with the aura that are really bad and mild migraines, too. When the bad ones start I lose a part of my field of vision—it’s like when someone shines a light in your face and when the light is gone, you can’t see because you were sort of blinded by the light. The aura starts that way and then grows. Sometimes I’ll look at someone and they’ll only have one eye, trippy stuff like that, and that’s when I know I am getting a migraine and I start to get panicky.

The pain starts maybe half an hour afterwards. I get really, really tired and extremely light- and noise-sensitive. Then I start to feel the pain, usually above one of my eyes or right in the middle of my forehead. It feels like the worst brain freeze you can imagine. I think other people’s pain feels different, but that’s what mine usually feels like. And then I get nauseous and puke up everything in my body and am in excruciating pain for five hours. Eventually I fall asleep and when I wake up it’s usually gone but I am weak for the next few days. That’s the physical pain. I also get intense anxiety when I realize I'm having a migraine, and then pretty depressed during and after.

SS: Let me start by saying: I have never had a migraine, knock on wood. So, I am interpreting everybody else’s descriptions. It’s very individualized. Everybody has a different experience of migraines.

Luckily, we had access to this amazing trove of “migraine art” where people express their feelings about their migraines through drawings and paintings and we found that very expressive without being so brutal that people who have migraines couldn’t look at them.

On why we still don’t totally understand migraines

SS: It’s two-pronged. One is that it’s so individualized, it’s hard to find any kind of treatment that works for everybody. But it’s also very underfunded in terms of research, and that has something to do with the fact that it’s not necessarily life-threatening but also because it’s considered a “women’s disease.” Women make up 75 percent of people who suffer from it. And that means millions and millions and millions of men suffer from it too. But that 75 percent is enough to stigmatize it and have it not be taken seriously and have not as much research focused on it.

EL: Historically our culture does not take women’s pain as seriously, so if there’s a disease that becomes associated with women and female pain...we don’t use the word hysteria anymore, but there is that attitude toward women and female pain. But the thing that happens then—because patriarchy affects everybody—is men who experience this pain, they aren’t taken seriously either because then it’s emasculating. And people with migraines look healthy, so with any invisible chronic illness there is less gravity attached.

SS: For a long time, I really didn’t get how deeply Emma was suffering and that she wasn’t just being dramatic about it. That happens so often to people who are suffering from migraines, and one of the reasons why I wanted to make the film was for people who don’t get it. Tons of people have migraines but others probably don’t know it because people don’t talk about it because it’s still stigmatized. So yes, I agree, believe them.

EL: Another thing that came up was the experience of loving someone who’s sick and wanting to fix it, which is very natural. The person who’s suffering does not need you to fix it, but does need you to be with them in it. So, let yourself off the hook for not fixing it, and instead just show up and be there with them.

On how the filmmaking experience was therapeutic for them

EL: I think for you, it was a way of coping. I was going through this thing that you didn’t understand, and the way you dealt with it was by learning as much as you could about it and to make it into something that would serve other people.

SS: Emma, the fact I was making the film, did that make you feel any way?

EL: Yes, it was very validating. It was exactly what I needed, for you to take it seriously. You ended up knowing way more about migraines than I did, which is so cool. It was definitely a show of your love for me.

I’ve seen so many iterations of the film and I always learn something. Watching it over and over has taught me a lot. It has helped me to understand my own body and condition and kind of forgive myself and forgive my body for the way it acts.

Out of My Head is screening via Theatrical on Demand; to request a screening in your hometown, click here. Check out the trailer, below.

This content is imported from Vimeo. You may be able to find the same content in another format, or you may be able to find more information, at their web site.
This content is created and maintained by a third party, and imported onto this page to help users provide their email addresses. You may be able to find more information about this and similar content at piano.io
Advertisement - Continue Reading Below
More From Health & Fitness
Exclusive: New Teleabortion Service Launches
Stress-Relieving Gifts That Will Put You at Ease
Advertisement - Continue Reading Below
My Tarot Card Dependency Controlled My Life
How Psoriasis Impacts Young Women’s Careers
Yoga Mats You'll Love, According to Yogis
Friendship, Infertility & Moving Forward
Changemakers 2021: Working Toward Wellness
Frida Mom Ad Shows the Struggles of Breastfeeding
Considering Changing Up Your BC? Read This First.
Created for From Marie Claire for Created by Marie Claire for
Twirla
Texas DV Shelter Destroyed by the Winter Storm