Yesterday, Americans experienced yet another horrific mass shooting. A gunman killed 26 people and wounded at least 20 more in a church; one of the youngest victims was just five years old; as many as 14 of the victims were children.

This kind of violence—so specific to our country—is only getting worse. Four of the five deadliest shootings in American history have occurred in the last year and a half. But instead of treating gun violence as the most urgent issue of our time, too many of us have been shocked into approaching this horror as if it’s normal: rote reactions, numbness, resignation.

I think somehow I folded into myself. It was all too horrible, too violent, and too many people didn’t care enough.

And then...we move on. There is no change in policy, no uprising in the streets. We repeat it all again the next time someone takes dozens of lives in minutes, using weapons that no one has any reasonable justification for owning.

I count myself among those who have been stunned into submission, believing that things will never change. After Sandy Hook, when so many children so close to my daughter’s age were butchered and this country did nothing...I think somehow I folded into myself. It was all too horrible, too violent, and too many people didn’t care enough to do what was needed to prevent the same thing from happening again.

I’ve come to see how selfish and lazy that sort of thinking is—how dare I not do everything within my power, every single day, to stop this? I know better; I think most of us do, too. Because the truth is that there are people working tirelessly to change this. And we do know what needs to be done; we know that this violence, this horror, is absolutely preventable.

Like so many mass shooters, the gunman in Texas this weekend had a history of domestic violence. He served in the Air Force and, in 2012, was court-martialed for assaulting his wife and child. This should have prevented him from buying a gun—federal law bans anyone convicted of domestic violence from purchasing a weapon. But loopholes allow abusers to buy them through private sales, and the law only impacts men who were married to their victim, protecting those who hurt girlfriends or partners.

We need to close these loopholes and stop making it so easy for people to purchase weapons—especially weapons made with the intention of killing the most people in the least amount of time. We need to stop blaming the mentally ill, or calling white shooters "lone wolves" instead of "terrorists." And we need to talk about the role toxic masculinity plays in these shootings and why it is that domestic violence is so often a part of a mass shooters' history. As The New Yorker's Emily Nussbaum tweeted, "If pretty much all mass killers were women, I think we'd probably highlight that fact."

This violence, this horror, is absolutely preventable.

We don’t yet know how this man in Texas was able to get his gun despite his history, but we do know—as Moms Demand founder Shannon Watts pointed out on Sunday—that the NRA has gone to court to protect abusers’ right to purchase deadly weapons. We know who's making it easier for murderers to do their worst.

Those who would make money from our pain and tragedy depend on us believing that we can't do anything. Politicians funded by the NRA will offer nothing more than empty “thoughts and prayers” because to support gun regulations would mean losing money. The NRA will continue to use their massive power and influence to fight sensible reform in the courts because the lives lost are not more important to them than profit. Recognizing as much is not “politicizing” or radical—it's simply the truth.

Each day that we are not doing all we can to stop this is a day we're allowing the horror to continue. Every tragedy we allow ourselves to normalize is one step closer to a national apathy that encourages even worse violence in its wake. I’m committing myself to do more, to do anything I can, to help stop the violence and the worthless cycle of "thoughts and prayers." To do more writing, more activism, more volunteering. I'm going to make sure that this issue is top of my mind every day—no matter how painful that feels. We all can do things, small and large, to stop these entirely preventable tragedies. I hope you'll think about what it is that you'll do, too. 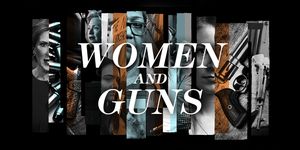 The Truth About Women and Guns
Jessica Valenti Contributing Editor Jessica Valenti is a columnist and author of five books on feminism, politics, and culture.
This content is created and maintained by a third party, and imported onto this page to help users provide their email addresses. You may be able to find more information about this and similar content at piano.io
Advertisement - Continue Reading Below
More From Politics
Kristin Urquiza Wants Justice for COVID-19 Victims
A Breakdown of VP Harris's Net Worth
Advertisement - Continue Reading Below
WH Announces Removal of the Hyde Amendment
What Liberation Means This Juneteenth
Kathryn Garcia: It's Time to Step Up or Shut Up
A Valedictorian Speaks Out Against Abortion Bans
Standing Between Care and Violence
Seeking Healing a Century After the Tulsa Massacre
What to Know about Texas's Abortion "Trigger Ban"
A New Book Invites Us to Rethink Menstrual Equity