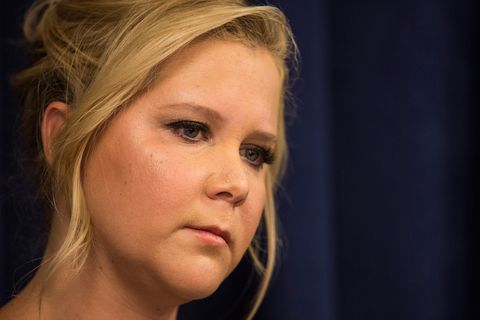 President Obama officially unveiled his plans to require all gun dealers to perform background checks before selling anyone a firearm. He did so during an emotional speech at the White House  on Tuesday in front of the families and friends of the victims of gun violence. Amy Schumer was in the audience, sitting in the front row. Schumer has worked on behalf of gun control since a gunman shot and killed two people and injured nine others during a showing of her movie Trainwreck in a movie theater in Lafayette, Louisiana over the summer.

Not a great picture, but here's Amy Schumer, who has done work on behalf of gun control. #WhiteHouse pic.twitter.com/n5Ui63ssZY

Schumer has worked with her cousin, Sen. Chuck Schumer, a Democrat from New York, to call on Congress to pass a law ending the loophole that allows people to buy firearms at gun shows and online without a background check. The Republican-controlled Congress has not enacted such legislation, but Obama intends to sidestep Congress with an executive order that closes these loopholes and imposes fines and possible prison time for gun dealers who violate the law.

Michael Sebastian Michael Sebastian was named editor-in-chief of Esquire in June 2019 where he oversees print and digital content, strategy and operations.
Advertisement - Continue Reading Below
More From Politics
How a Parkland Mom Turned Her Grief into Action
He Voted for Trump. She Voted for Bernie.
Advertisement - Continue Reading Below
How Guerrilla Feminists Are Fighting Femicide
Who Was Mayor Pete's Father, Joseph Buttigieg?
Everything We Know About Senator Warren's Husband
Mayor Pete's Husband Would Be a "First Gentleman"
Nancy Pelosi, Icon, Ripped Up Trump's SOTU Address
Thoughts From a First-Time Caucus-Goer
And Now, a Word From the Future Voters of Iowa
Ayanna Pressley Wants Total Justice for Survivors