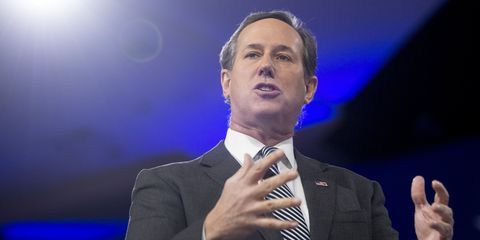 Following the immense success of March For Our Lives, which saw Washington, D.C.'s biggest political demonstration of all time take place, pro-gun politicians are voicing their own, unasked for, opinions. And former Senator of Pennsylvania, Rick Santorum, decided to air some extremely offensive and unhelpful ideas today.

At CNN's "State of the Union," Santorum revealed his "ideas" by saying, "How about kids, instead of looking to someone else to solve their problem, do something about maybe taking CPR classes, or trying to deal with situations that when there is a violent shooter that you can actually respond to that?"

I think we can all agree that Santorum's "ideas" are ludicrous, and completely disrespectful to any child that's been a victim of gun crime, or witnessed a mass shooting while at school.

Because he likes the sound of his own voice so much, Santorum continued:

"They took action to ask someone to pass a law. They didn't take action to say, 'How do I, as an individual, deal with this problem? How am I going to do something about stopping bullying within my own community? What am I going to do to actually help respond to a shooter?' Those are the kind of things where you can take it internally, and say, 'Here's how I'm going to deal with this. Here's how I'm going to help the situation,' instead of going and protesting and saying, 'Oh, someone else needs to pass a law to protect me.'"

To sum up, Santorum doesn't believe that it's a politician's job to ensure citizens are safe in the country they live in, or while they're at school. Which is just great.

Related Story
March for Our Lives Rally Breaks Records
Amy Mackelden Amy Mackelden is a freelance writer, editor, and disability activist.
This content is created and maintained by a third party, and imported onto this page to help users provide their email addresses. You may be able to find more information about this and similar content at piano.io
Advertisement - Continue Reading Below
More From Politics
For Teachers, Going to Work Can Mean Life or Death
Want to Help Moms? Prioritize Menstrual Equity
Advertisement - Continue Reading Below
Abortion Rights Start at the State Level
All of Your Abortion Questions Answered
The Texas Abortion Snitch Site Is Having a Bad Day
The Future of Afghan Women Depends on Us
How You Can Help People in Afghanistan
Andrew Cuomo Has Resigned as NY Governor
Gwen Berry: Athlete, Activist, Olympian
The Anti-Choice Endgame: Power And Control