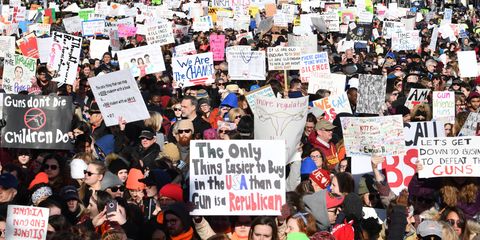 March For Our Lives rallies have been taking place all over the world this weekend, campaigning for urgent changes to gun control regulations in the wake of the tragic shooting at Marjory Stoneman Douglas High School on February 14, 2018.

According to an incredible press release on behalf of the March For Our Lives team, it's being reported that the Washington, D.C. rally was the largest political demonstration in the nation's capital to ever take place.

As the press release reads, "March For Our Lives had secured a permit for 500,000 people for Pennsylvania Avenue between 4th and 12th St NW. Law enforcement partners confirmed that the audience exceeded expectations with crowds extending well beyond 12th street and out further than Pennsylvania Avenue."

It also states that "while Washington, D.C. authorities have yet to give an official estimate, reports published by major news organizations put the crowd size at 800,000 people, which would make it the largest demonstration in the capital's history."

According to ThinkProgress, attendance at Washington's march was significantly higher than at Donald Trump's inauguration, with Senator Chris Van Hollen telling The Hill of Saturday's event, "I can tell you for sure, it’s larger than the Trump inauguration."

The president wasn't in the White House while March For Our Lives was taking place. He was at his Mar-a-Lago resort, and approximately 5000 protestors took the march to him:

#MarchForOurLives Going on the bridge over train tracks at West Palm Beach, taking it closer to Mar-a-Lago. Crowd Estimate: 5,000 pic.twitter.com/Er7QBv8qIY

More than 800 locations around the world hosted events this weekend. With March For Our Lives far exceeding attendance number expectations globally, students and activists hope to influence gun control policy in a big way.