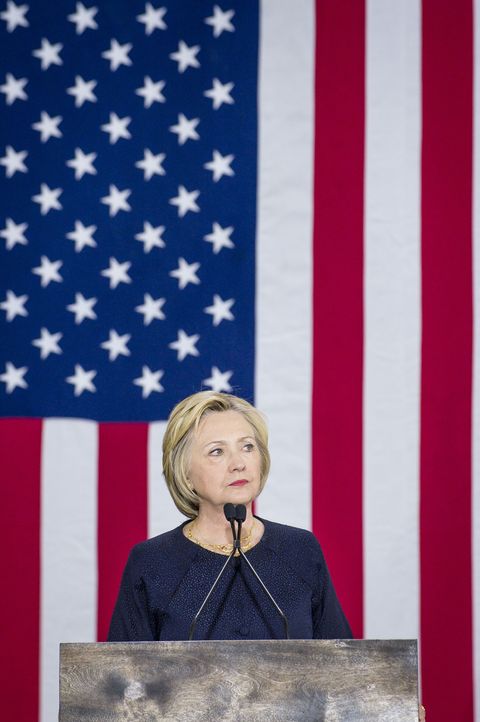 While Donald Trump is busy coming up with deeply unhelpful and borderline-crazy theories following the devastating attack on Orlando's Pulse Nightclub, Democratic presidential candidate Hillary Clinton has called for a ban on assault weapons. (Note: Omar Mateen used a AR-15 rifle, which he bought legally despite being investigated for terrorist ties twice by the FBI.)

The presidential hopeful gave a stirring speech about gun control, coming down hard on what she calls weapons of war.

"It's essential we stop terrorists from getting the tools they need to carry out their attacks," she said during a Cleveland rally (her first speech since Sunday's shooting). "And that is especially true when it comes to assault weapons like the ones used in Orlando and San Bernardino. I believe weapons of war have no place on our streets."

Clinton also addressed the "terror gap," or the fact that individuals who have been investigated by the FBI aren't subject to tighter gun regulation.

"We may have our disagreements about gun safety regulations, but we should all be able to agree on a few essential things. If the FBI is watching you for suspected terrorist links, you shouldn't be able to just go buy a gun with no questions asked. And you shouldn't be able to exploit loopholes and avoid criminal background checks by buying online or at a gun show. And yes, if you're too dangerous to get on a plane, you're too dangerous to buy a gun in America....That may not stop every shooting or every terrorist attack. But it will stop some, and it will save lives, and it will protect our first responders."

Honestly, the notion that anyone could disagree with this is mind-blowing. To read more about Hillary Clinton's views on gun control, read her essay for Marie Claire.

We need to stop terrorists from getting the weapons they need to carry out attacks. pic.twitter.com/Q6r7VVj9ds

Mehera Bonner Contributor Mehera Bonner is a news writer who focuses on celebrities and royals—follow her on Instagram.
This content is created and maintained by a third party, and imported onto this page to help users provide their email addresses. You may be able to find more information about this and similar content at piano.io
Advertisement - Continue Reading Below
More From Politics
Joe Biden's Granddaughter Is His Biggest Fan
Kamala Once Clashed With Biden Over Abortion
Advertisement - Continue Reading Below
Where Kamala Harris Stands on Gun Control
Maya Harris Is Kamala's "Bobby Kennedy"
Unraveling the Latest Kamala Harris Controversy
Who Is Donald Harris, Kamala Harris's Father?
Kamala Harris Is "Momala" to Two Stepchildren
Kamala Harris Is Married to Her Number One Fan
Joe Biden's Youngest Daughter Is An Activist
What Biden Has Pledged to Do In His First 100 Days