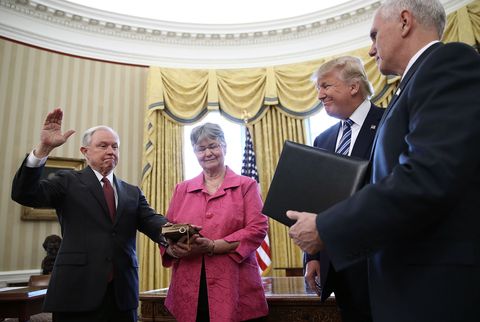 Remember way back when (last month) when national security adviser Michael Flynn resigned following reports that he was communicating with Russia and lied about it to Vice President Mike Pence? It now seems that newly confirmed Attorney General Jeff Sessions may have done something very similar. Late Wednesday night, the Washington Postpublished an exclusive report claiming that, while he was a Senator, Sessions met with the Russian ambassador twice in the months leading up to the election—even as late as September 2016, after the FBI had already started investigating Trump campaign ties with Russia.

Fishy, sure, but the real issue is that the attorney general didn't tell Congress. During Sessions' confirmation hearing, Democratic Senator Al Franken asked him point-blank if he had communicated with Russian officials before the election, and he said no.

Confirmation hearings are under oath, so if Sessions lied, it's perjury.

Sessions' withholding information during sworn testimony is rather hypocritical. In 1999, Sessions vehemently criticized former President Bill Clinton when he was charged with perjury, saying "the American people believe no one is above the law."

It also builds on the narrative that's been growing for months regarding President Trump's ties with Russia. These revelations make Sessions the sixthprominent Trump confidante to have ties to Russian officials. (Others include Michael Flynn, Secretary of State Rex Tillerson, former campaign manager Paul Manafort, former adviser Carter Page, and lawyer Michael Cohen.) The FBI has been investigating said ties for much of the last year.

On Tuesday evening, The New York Times released a report stating that the Obama administration "scrambled" to preserve evidence of Russian attempts to influence the election (and possible Trump campaign collusion) in the final days of Barack Obama's presidency.

So what's next for Sessions? Democrats are all calling for him to step down, with prominent officials like Senator Elizabeth Warren (D-MA) being particularly vocal, tweeting, "We need Attorney General Jeff Sessions—who should have never been confirmed in the first place—to resign. We need it now."

And we need Attorney General Jeff Sessions – who should have never been confirmed in the first place – to resign. We need it now.

While Republicans have largely held off on calling for Sessions' resignation, several have said he needs to recuse himself from the Russia investigation. Senator Lindsey Graham (R-SC) said Wednesday that if Sessions met with a Russian official, Congress needs to hire an independent prosecutor to investigate the claims. Congressman Jason Chaffetz (R-UT), who chairs Oversight & Government Reform Committee, tweeted this rebuke.

AG Sessions should clarify his testimony and recuse himself

Sessions denies any wrongdoing. While his spokeswoman confirmed the meetings between the then-Senator and the Russian ambassador, she said in a statement, "There was absolutely nothing misleading about his answer [during his confirmation hearing]."

This story is developing.